Less than 20 miles from the Spanish frontier to the mouth of the Adour is the French Basque Coast.  Lots of half-timbered houses, brightly colored trim, mostly red. Coastline with crashing waves, the interior hilly and very green (they get a LOT of rain there). French is the main language, I didn’t hear (or see signs) in Basque for the most part (which is different from the Spanish Basque region where everything was in both languages and people were speaking Basque, here they were mostly speaking French). Virtually no one spoke English, just minimally in the hotel, not at all in lots of the shops and restaurants.  Heard English spoken by a few tourists, but for the most part I think the tourists are from France, or at least Europe.

The airport, named Biarritz, is between Biarritz and Bayonne. There is a local bus system that goes all around Biarritz, Bayonne and other towns and line 14 runs from the airport to Bayonne (and Biarritz). It takes about half an hour and costs 1€. Several per hour. To travel between Biarritz and Bayonne line 1A takes about half an hour and costs 1€. Modern, attractive (bright pastel stripped buses – pastel stripes are the ‘thing’ around here) buses. The train works best for getting to either St Jean (de Luz or Pied du Port).

I spent 4 nights in Bayonne and did day trips to St Jean Pied du Port, St Jean de Luz and Biarritz. While I had a few sunny hours in Biarritz and Bayonne, most of the time it was cool (60s), dreary, rainy and very windy which most likely explains the fact that this was not my favorite part of this trip (or any trip). Also, this was the only hotel I didn’t really like.

Bayonne –population 45,000, divided by the Nive and Adour rivers. It’s set back about 5km from the coast, but has two rivers and five bridges.  A cathedral city and the capital of the Pays Basque, it's characterized by narrow streets full of half-timbered tall buildings (about 5 or 6 stories). The smaller river, Nive runs through the center and the quaysides are full of eateries, which on nice days, have outside seating and street music. In the rain it’s pretty dreary though. The riverside quays are the city’s most picturesque focus, with 16th century arcaded houses. There are several shopping streets, it’s larger than it feels at first. Good selection of places to eat, the only international chain I saw was one ‘Subway’. The cathedral sits on a small square (which was really the only square in town) and is somewhat hemmed in by buildings. Still, it’s an impressive building and its steeples can be seen from a distance. There are some old ramparts  (walls) around the edges of the old town, not particularly scenic though.  There are two ‘castle’ like structures, one on each side of the river. While I was there four nights I was only in Bayonne itself a few rather early mornings or afternoon/evenings as I did day trips each of my three full days. But that was more than enough to explore the small city. If in the general vicinity Bayonne is certainly worth a visit, it’s just that compared with so many amazing places in Europe it doesn’t quite claw it’s way to become a ‘must see’. 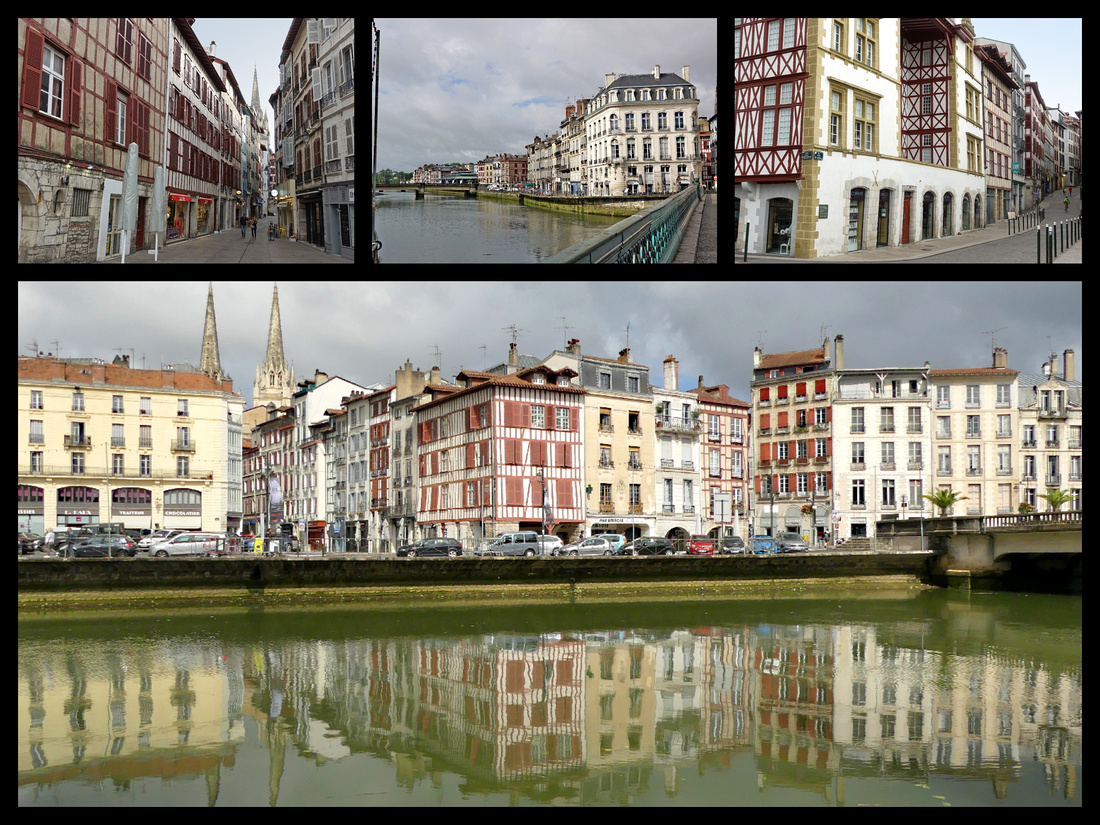 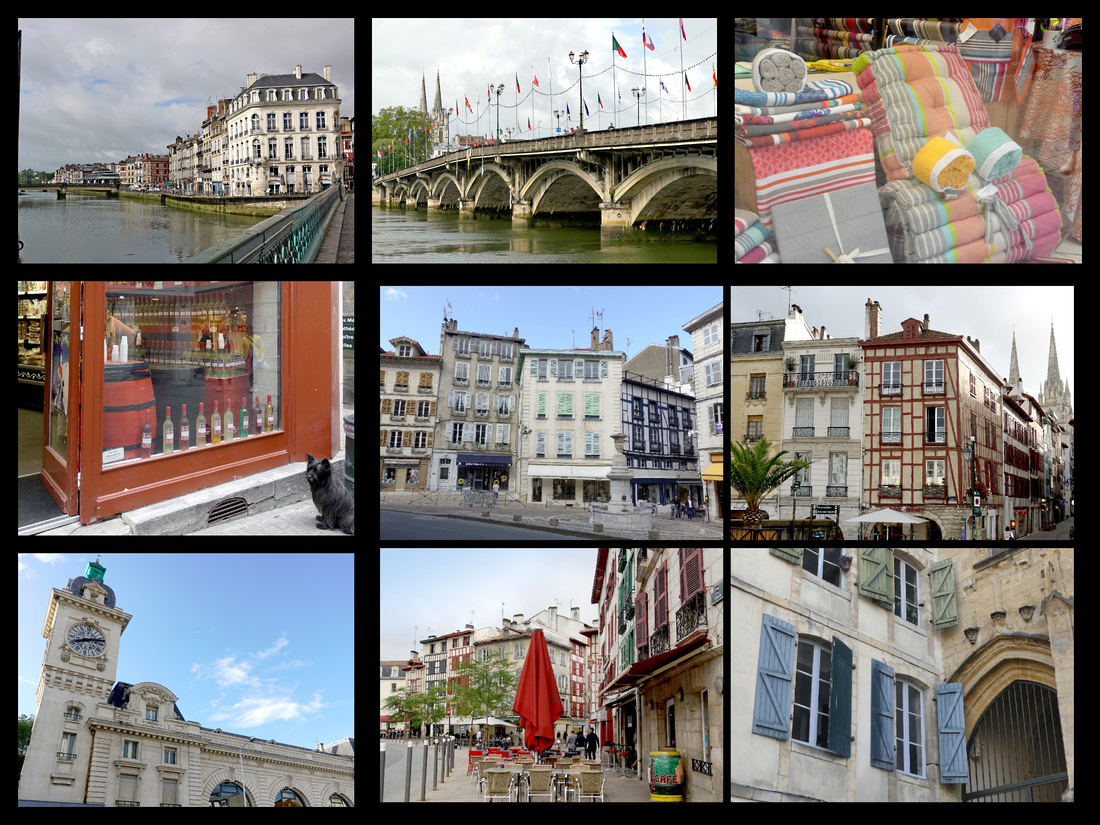 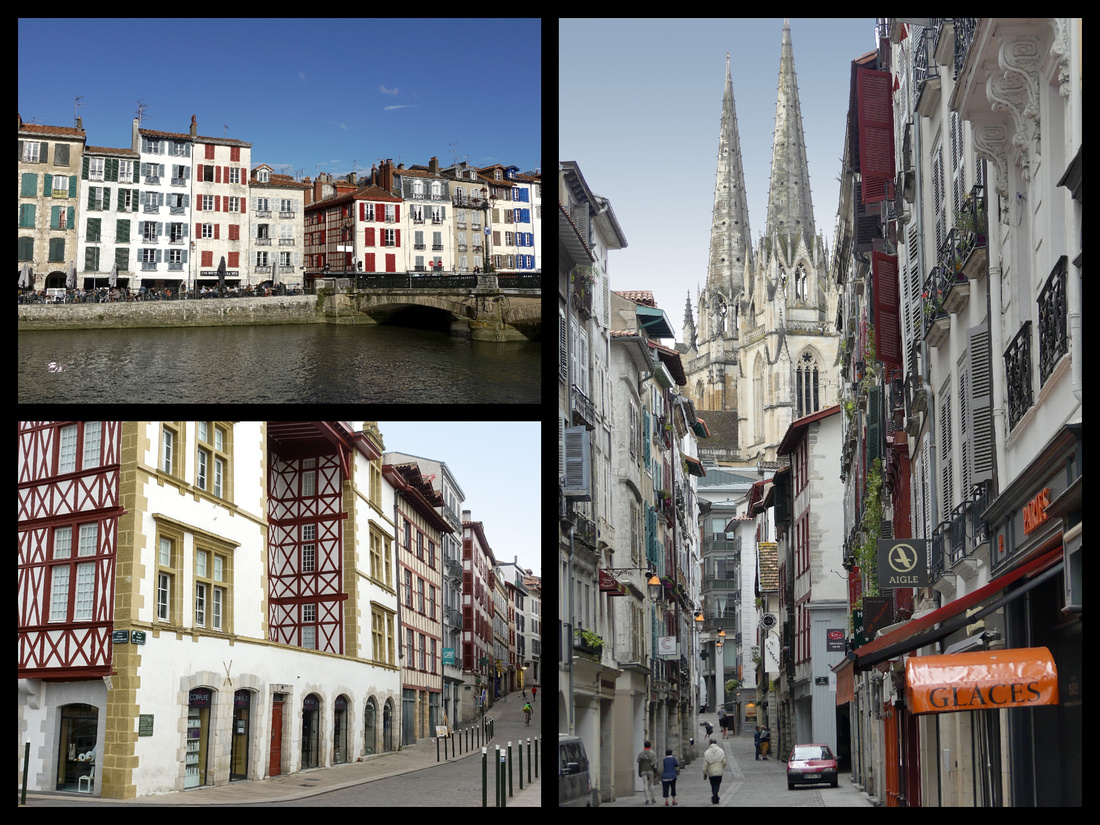 “St Mary's Cathedral is gothic in style and built using locally-sourced white and red stone on the site of a Romanesque cathedral which was destroyed by fire in 1258. Situated in the heart of the historic centre of Bayonne on a mound overlooking the Nive and Adour rivers, the cathedral contains relics of St Léon, a 9th century Bishop of Bayonne and was listed as a World Heritage Site in 1998 as part of the French Pilgrim Routes of Santiago de Compostela. The adjoining cloister dates back to 1240. Constructed in stages between the 13th and 16th  centuries, it was not until the19th  century that the spires were built giving the cathedral the elegant outline it has today. The chapels are decorated with 14th century style paintings by Steinhel and the stained glass windows are done in the style of Chartres Cathedral.”

While I don’t find Bayonne listed on any of the current routes of the Camino, logistically this is where you need to come to start either the Camino del Norte or the Camino Frances (unless you had someone drive you to St Jean Pied du Port or Hondarribia) as it’s the only place with public transportation there. There is a pilgrim office in the cathedral so it seems to be ‘on the Camino’ but very few people today start walking from Bayonne, most take a train to St Jean Pied du Port or a bus to Hondarribia/Irun on the Spanish boarder. 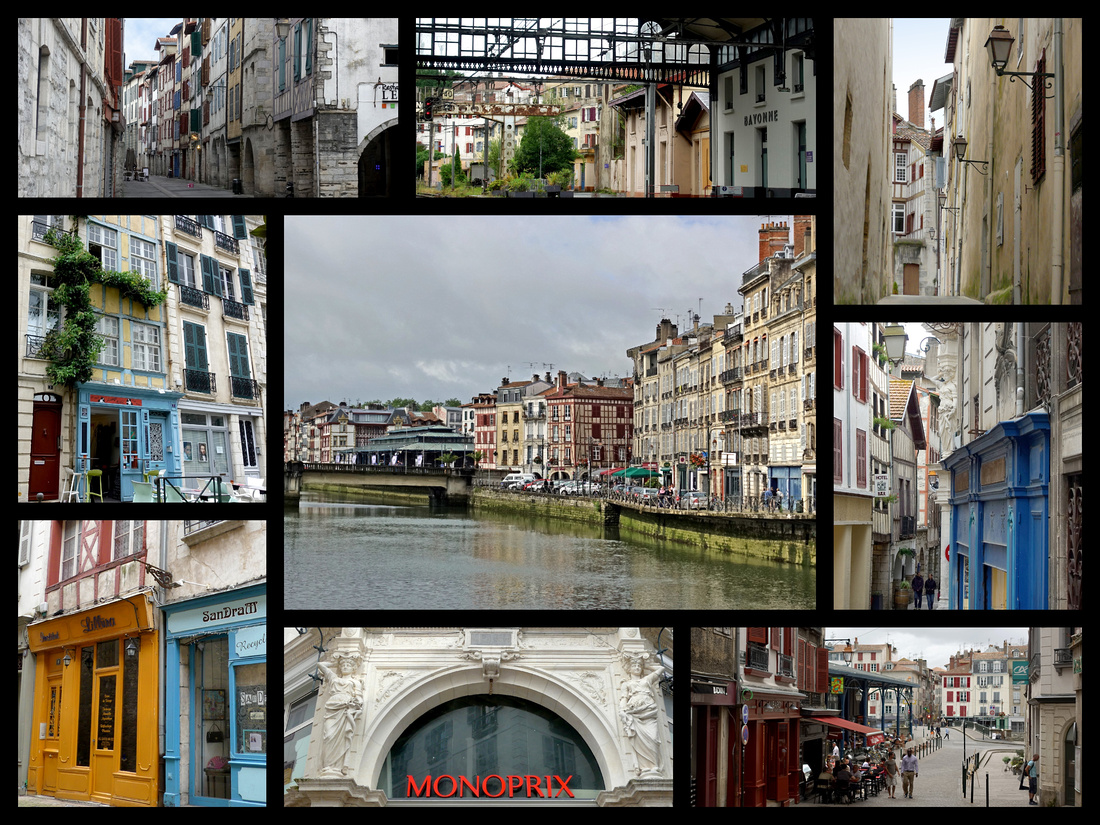 Biarritz – Population 30,000  Up until the 1950s, Biarritz was the Monte-Carlo of the Atlantic coast, transformed by Napoléon III during the mid-19th century into a playground for monarchs, aristos and glitterati. With the 1960s rise of the Côte d’Azur, however, the place went into seemingly terminal decline, despite having been discovered by surfers in 1957. But from the early 90s, Biarritz was rediscovered by Parisian yuppies, a new generation of the international surfing fraternity and a slightly alternative family clientele, who together have put the place back on the map. Eleven miles from the Spanish border. 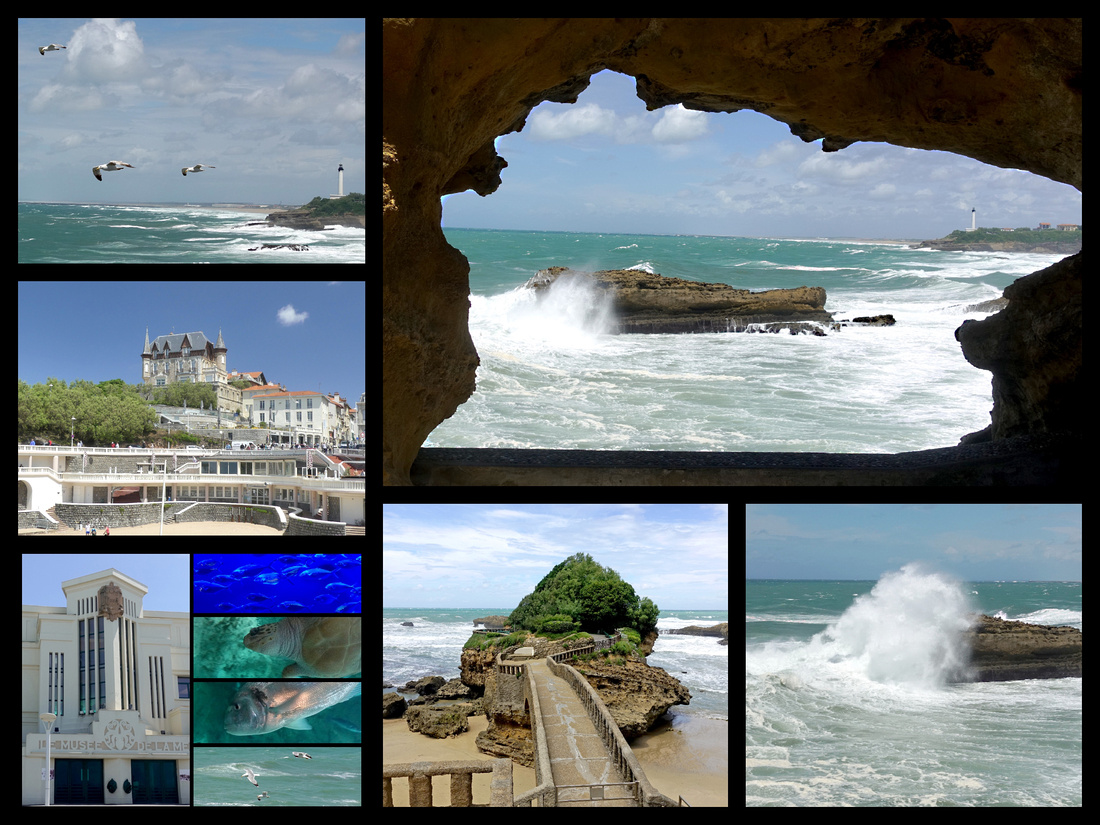 The main feature of Biarritz is the large curved beach, the Grand Plage, with a peninsular arm at one end with the lighthouse, and rocky outcroppings at the other. Alongside the beach is the Quai de la Plage promenade. This wide pedestrian walkway offers stunning views of the breaking waves and the Biarritz lighthouse in the distance. The large Casino, built in the 1930s, is a major feature of the beach. Biarritz is the surfing capital of Europe, heavy winds bring strong surf – this is normally a good thing for surfers. But when I was there the wind – and the surf – was SO strong that surfing (and swimming) were prohibited. It was cloudy and dreary all morning, I ended up going to the Aquarium during a downpour cause what else was I going to do. It’s pretty mediocre and no English signs. But a turtle and a fish are the same in any language. The heavy surf did make for some impressive waves which were fun to watch when it wasn’t raining. And then miraculously the sun came out for two or three hours and Biarritz was much nicer. Still, I wish I had seen it with the brightly stripped beach cabanas that are on all the post cards. 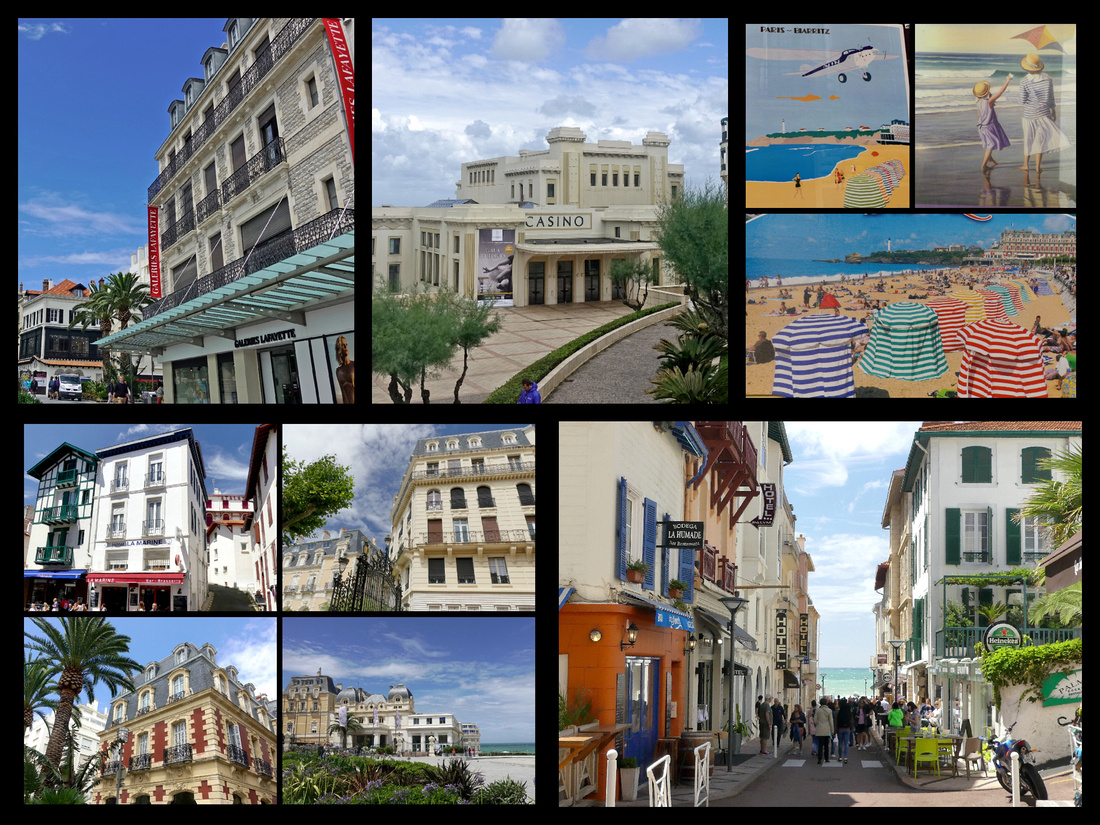 Along the beach is a large casino and the Hôtel du Palais, built by the Emperor Napoleon III for his wife Eugénie, ( Second Empire style). Since 1893, the building has been used as a hotel.  The Fishermen Port, originally built in 1870 for local fishermen now mainly houses leisure boats. 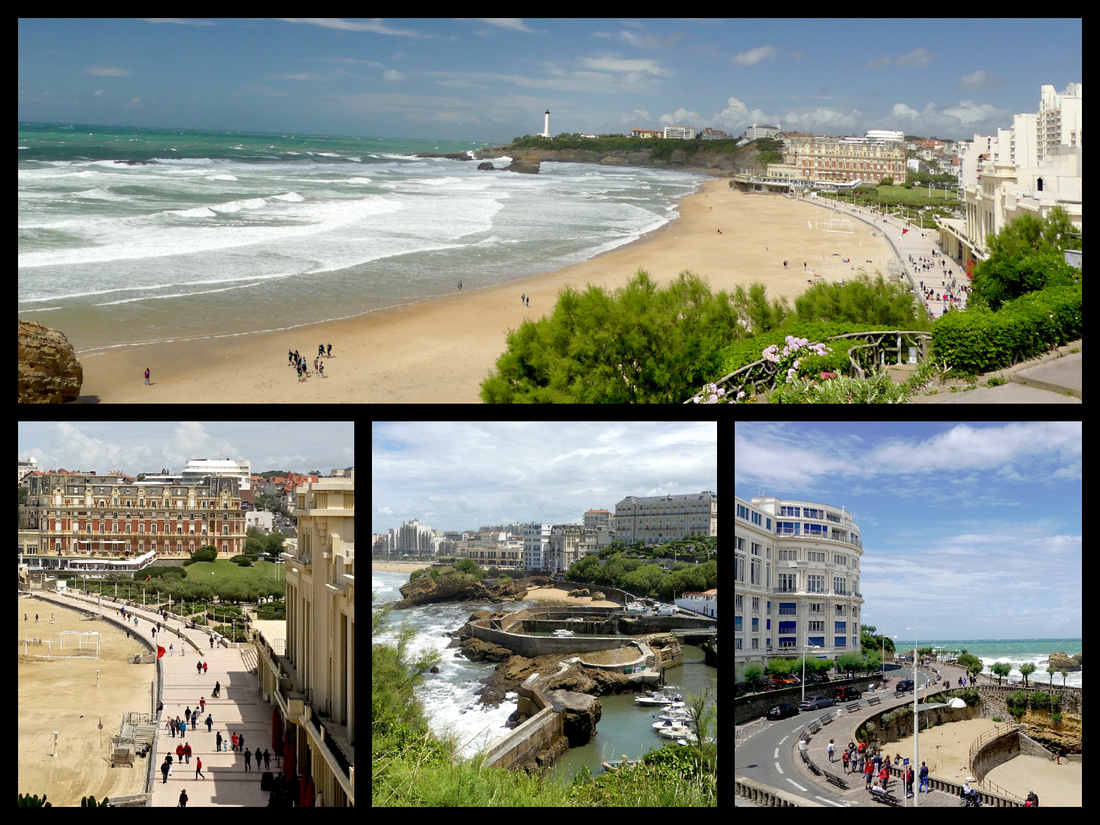 Rocher de la Vierge (Virgin of the Rock) is set on a steep, narrow rock jutting into the ocean. The site is accessible by an iron bridge built by the Gustave Eiffel workshops. As the focal point, a statue of the Virgin Mary stands on top of the rock, looking out towards the sea. There is a great panorama of the coastline from here, extending from the mouth of the Adour River to the Spanish frontier.  Vieux Port lies on the other side of the headland. The most atmospheric part of the town of Biarritz is centered on Rue du Port Vieux, which leads inland from the Vieux Port. There are several more modern, and pleasant, shopping streets. 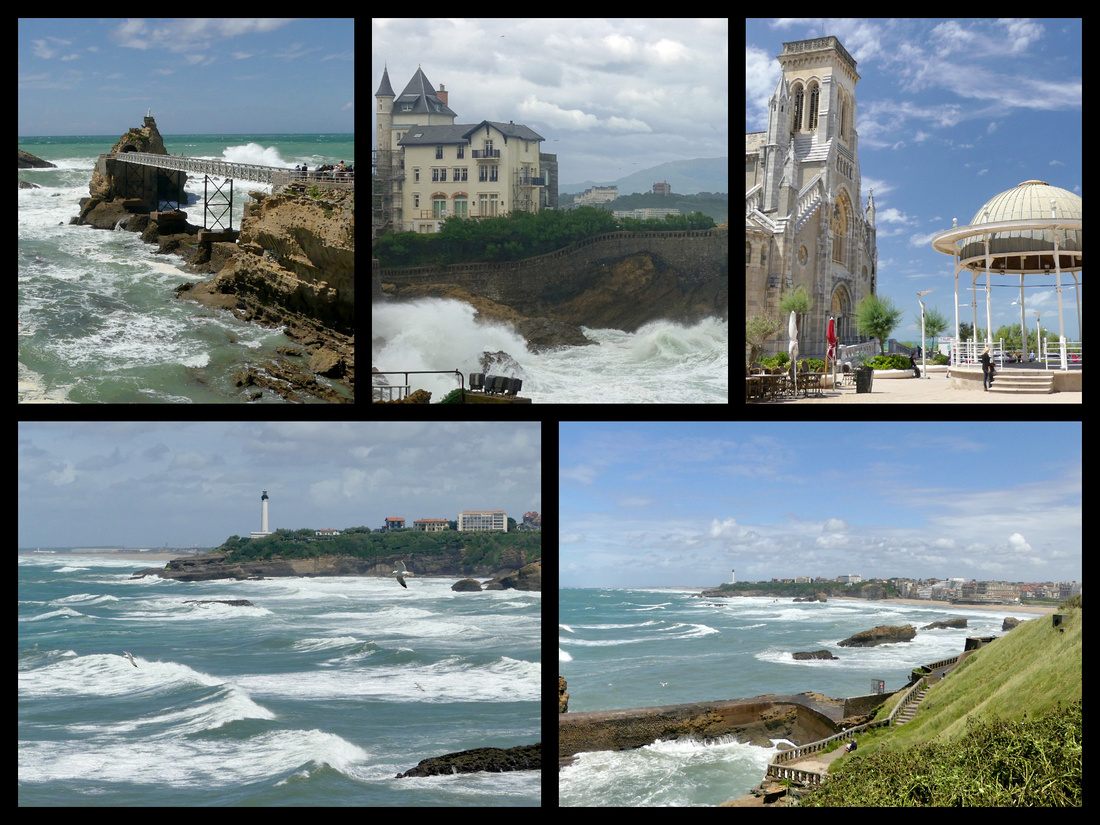 Saint-Jean-de-Luz (16 miles/ ¾ hour train from Bayonne, pop 14,000)   A quaint fishing village with traditional Basque character, the old quarter is full of half-timbered buildings, it’s the most attractive town in the area and still one of the busiest fishing ports in the area. Looks like it would be absolutely charming except it was very dark and cloudy and rained most of the day I was there. While there were frequent trains all morning, the options for return trains in the afternoon left me with a choice of one hour or almost six hours! I did opt for the longer time figuring I’d have a nice long lunch somewhere. But it stopped raining for an hour or two and so I walked around the town/beach and harbor and thus delayed lunch till around 2:30 and the restaurant kind of rushed me through my meal as they wanted to close up. So much for a leisurely lunch reading my book; after less than an hour I was back exploring the town in the rain. 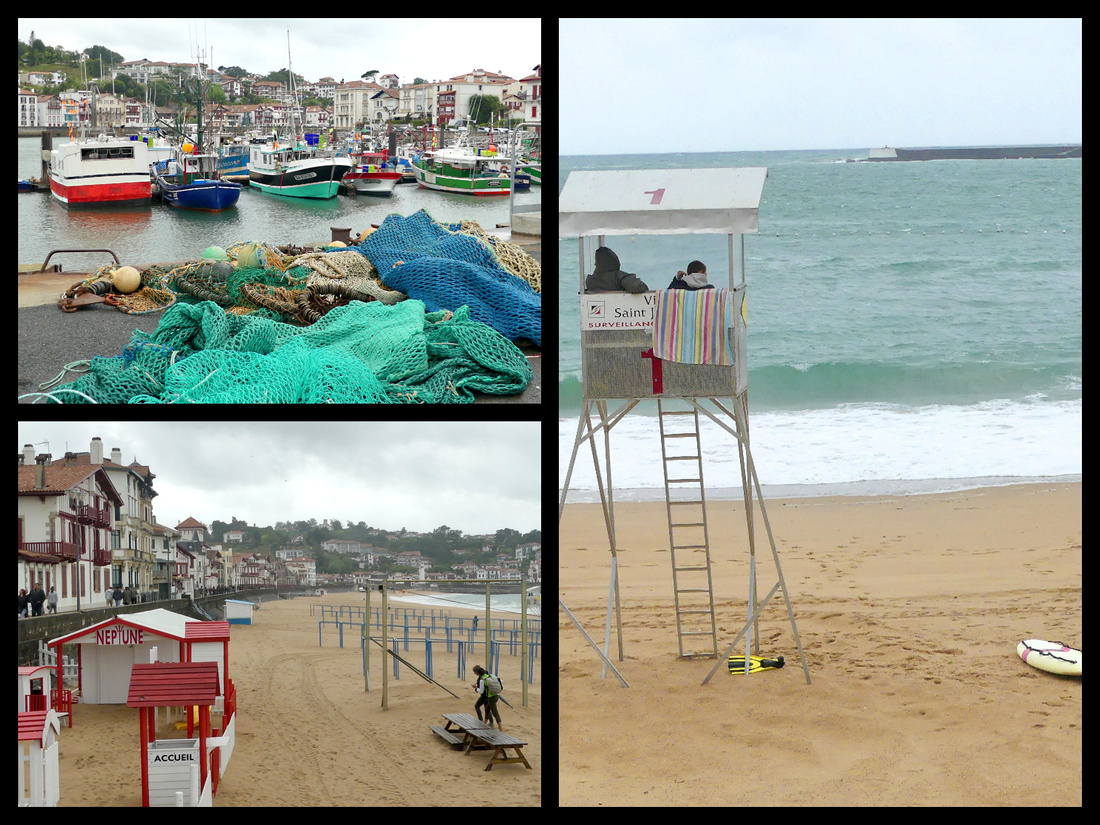 The wealth of St-Jean’s seafaring past is evident in the town’s 17th and 18th century merchant and ship-owner’s houses. Adjacent to the Hotel de Ville on the plane tree studded Place Louis XI is the turreted Maison Louis XIV. The Maison de l’Infante is a pink Italiante villa overlooking the harbor.  The church of St-Jean-Baptjiste is on pedestrianized rue Gambetta, the main shopping and tourism street.  The churches’ main claim to fame is that it is where Louis XIV and Marie Antoinette were married. There is also an attractive and lively food market (Les Halles) and plenty of shops selling clothing, local food and many featuring the Basque fabric, which is brightly striped. 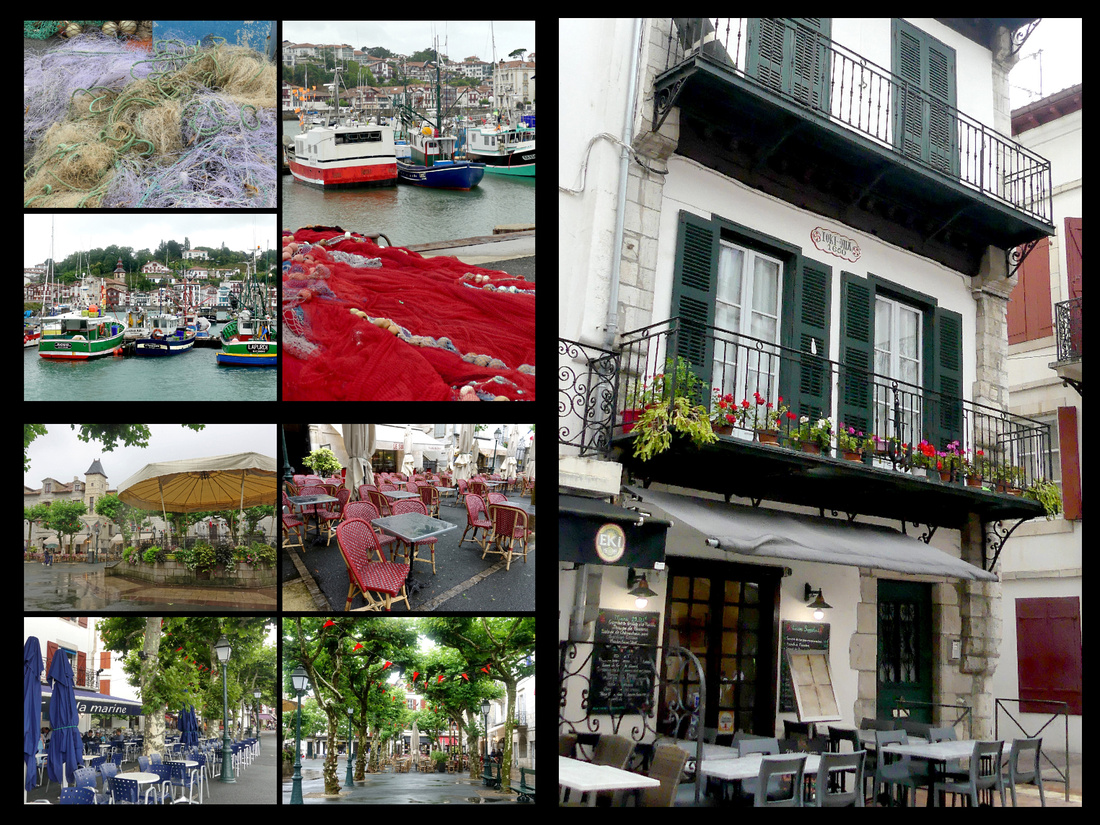 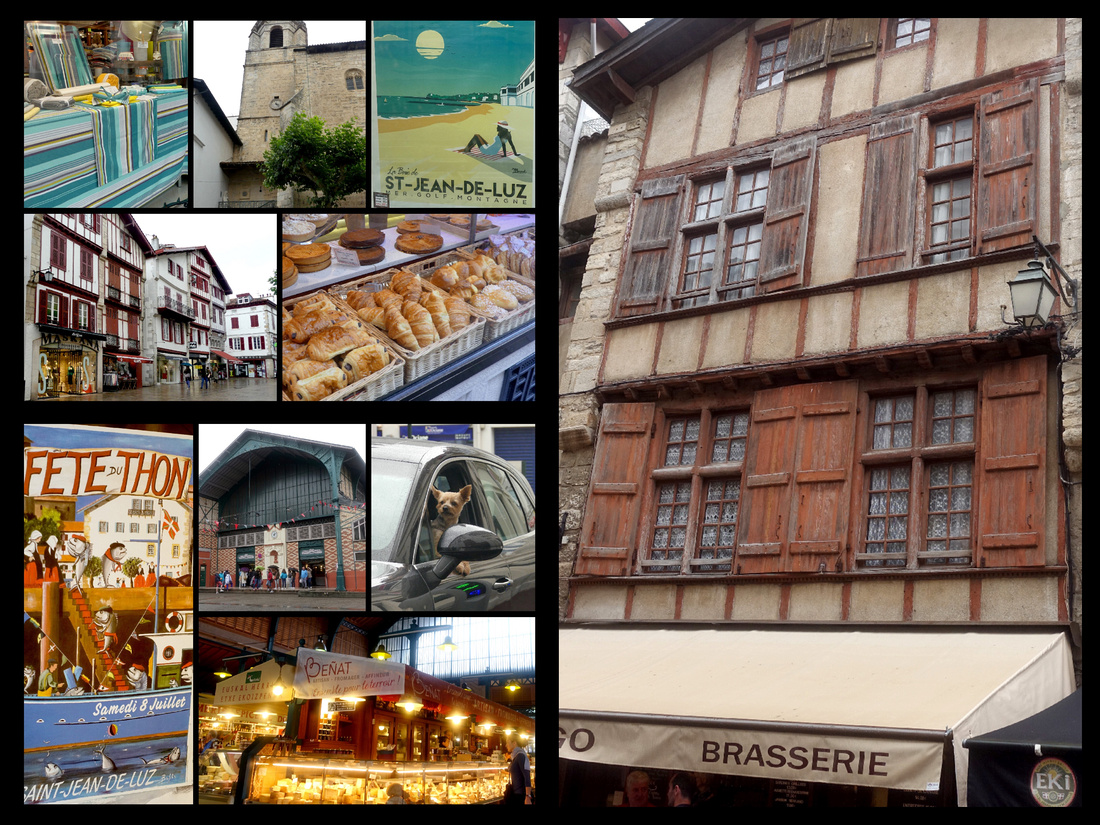 (1 hour train from Bayonne, population 1527) Located at an elevation of 1,300 meters, this medieval town was an important stop on the Camino to Santiago de Compostela and was considered one of the most difficult stages of the pilgrims' journey. Dating back to Roman times this area has been an important passage through the Pyrenees and dating back to the 10th century it has been the meeting point of the Caminos de Santiago that come through from various points in France. Listed as a UNESCO World Heritage Site, the historic old quarter has steep, winding cobblestone streets and stone bridges and a church - the Eglise Notre Dame du Bout du Pont. Literally "Saint John [at the] Foot of [the] Pass", it is now the start of the Camino Frances, the most popular of the Caminos. It is 5 miles from the Spanish border on the River Nive. 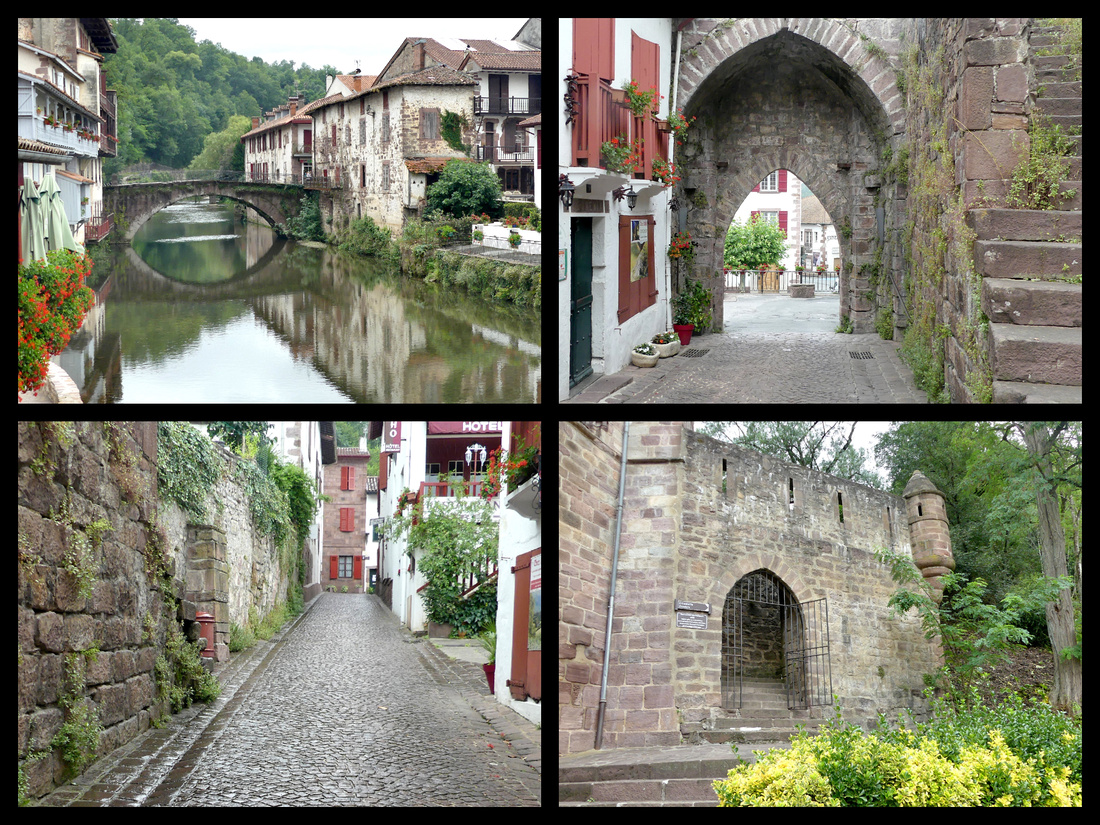 Saint-Jean-Pied-de-Port is the terminus on the railway line from Bayonne through the French Basque Country, along the valley of the river Nive, with two or three services each day. The train station is 1 km from the center of the town.

The main street is the cobbled rue de la Citadelle, which runs down hill and over the river from the 15th century Porte St-Jacques to the Porte d'Espagne by the bridge. From the bridge, there are views of the old houses with balconies overlooking the Nive. Many of the buildings are very old, of pink and grey schist, and retain distinctive features, including inscriptions over their doors. One, a bakery, lists the price of wheat in 1789. 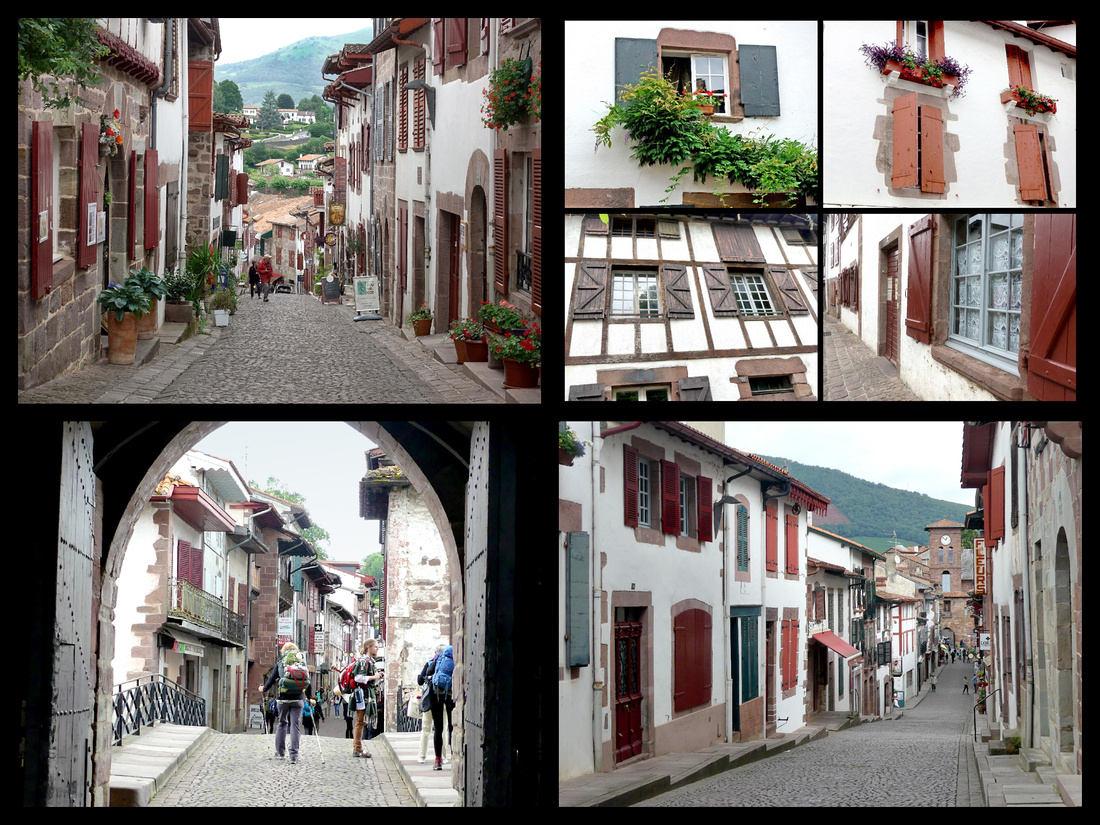 The Camino is pretty much the main thing in town. There actually were a number of ‘regular’ tourists around but the pilgrims, and the pilgrim office, the numerous hostels, and shops catering to hiking were the main feature. I had intended to start the Camino and walk an hour or so, even though I knew I would have to backtrack but I wanted to see what the beginning of the Camino is like. Unfortunately it was raining pretty heavily by the time I had explored the town itself so I just took the train back to Bayonne.