Italy Through Fresh Eyes - Chasing the Sun in Italy in March: Part 2 Florence

Although I’d only been to Florence once, 9 years before, we easily found the Hotel Alba Palace on the street to the right of the train station. The street is not especially scenic, nor is exterior of the building. But lobby and breakfast room were quite nice, and there’s a bar with cold water, hot water – tea, coffee, etc. and cookies and savory snacks (pretzels, nuts, etc.) available all day. The room - #001 is right next to the breakfast room and elevator – but utterly quiet inside. And OMG – what an amazing room! The room is two stories high with a gigantic exposed stone and brick wall and another brick wall, arcaded ceiling, two story marble column. Queen size bed, beautiful painted armoire, matching small cabinet (hiding the mini-fridge), and bench (plus a wooden table/desk and two wooden end tables. 48” flat screen TV. And then ---- wood and iron spiral stair case leading to a loft with two twin beds, more great furniture and French doors leading to a large terrace with a table and chairs. And the bathroom is also huge, with full tub. So it’s clearly a ‘quad’ room. Only a 5 minute walk from the train station or Santa Maria Novella church/piazza (with several decent restaurants) and about 10 minutes from the Duomo. What a find. €125 a night. (Only drawback was a rather mediocre breakfast) 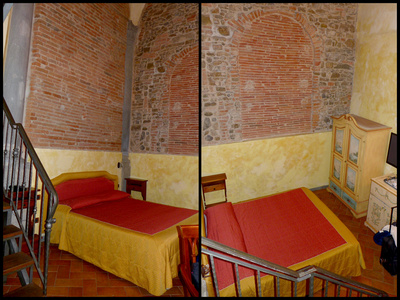 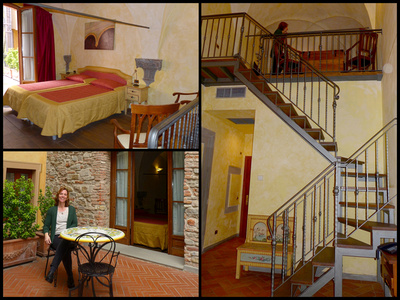 We dropped our stuff and went out to explore –  Piazza del Duomo , Piazza Signoria, Pont Vecchio, Mercato Nuovo, San Lorenzo cloister, San Lorenzo Market. Florence center, another UNESCO World  Heritage Site,  is quite compact and very walkable and much of the center is pedestrianized.

On the way back to the room we stopped and got a bottle of wine and got some of the free snacks from the hotel and had ‘cocktails’ on the terrace. Then I ran out and got some early evening shots while Crista hung out in the room. Then went to one of the restaurants on Piazza Santa Maria Novella – pasta, risotto at an outside table (they had heater lamps).

Can you “see” Florence in one full day? Yes you can. 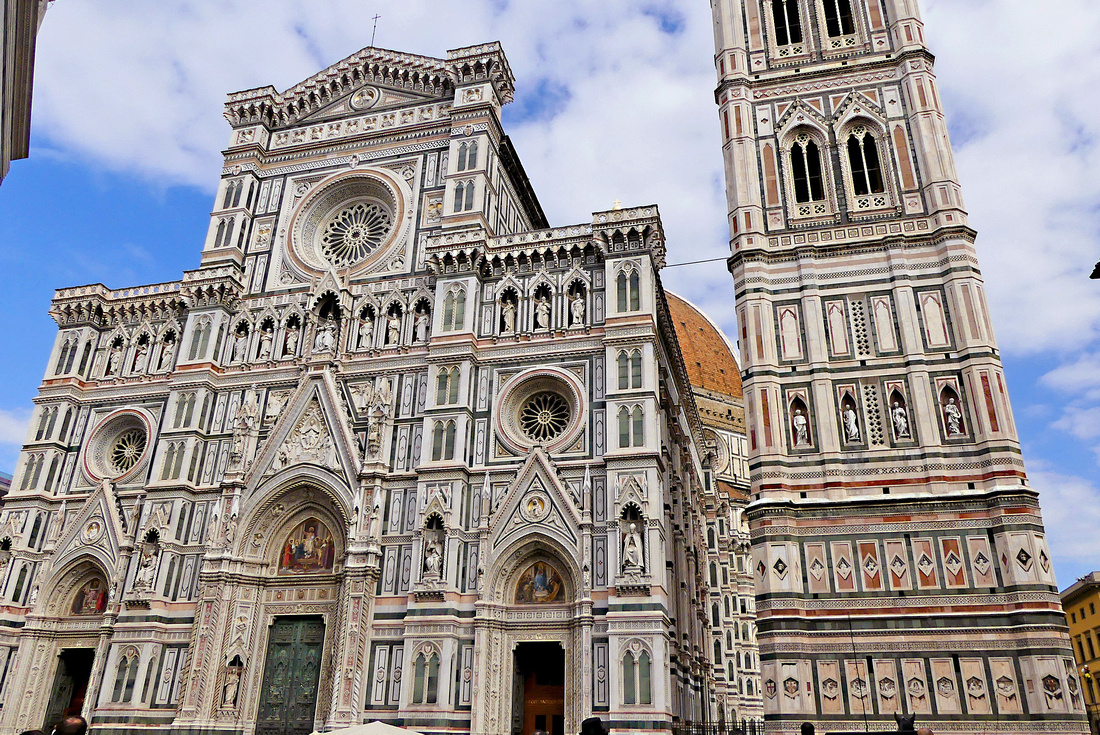 The buildings on the Piazza del Duomo – which include the Duomo, the Baptistery, and the Campanile di Giotto are among the most colorful buildings in Italy. The exteriors are composed of geometrically patterned bands of white, pink, and green marble, an interesting contrast to the sienna-colored fortress-like palazzi around the city. One description I read said they looked like  “buildings in carnival wear”.  Florence has a very heavy, somber and foreboding feel to its streets lined with dark, heavy stone palazzos so the ensemble on Piazza del Duomo really stands out. The Duomo is one of the largest (Europe’s 4th largest) and most impressive cathedrals and represents the “flowering of the Florentine Gothic style”. The dome, by Brunelleschi, was the largest when it was built (1296 to 1436) and he based it on the construction techniques used in the Pantheon. When Michelangelo was working on the design of the dome of St Peter’s he based it on the Florence dome. Opposite the Duomo is the small, octagonal shaped Baptistery. The exterior is clad in the same tricolor marble as the Duomo, but seems much more ‘plain’ – except for the famous bronze doors- which some say marks the beginning of the Renaissance. The actual building is much older than the Duomo, but during the same period that the Duomo was built, the interior was covered with glittering mosaics (by Venetian and Byzantine style artists). In addition to the ‘usual’ depictions of Christ, saints and sinners, there is an interesting monster like creature devouring a human.

The interior of the Cathedral can be entered for free, but the Baptistery as well as climbing the Campanile and the Dome of the Duomo require a ticket. One ticket (15€ covers all of them plus the cathedral museum). In addition, in order to climb the Duomo dome, you need a reservation.  The building directly across from the Baptistery has tickets and a machine where you make your climb reservation. 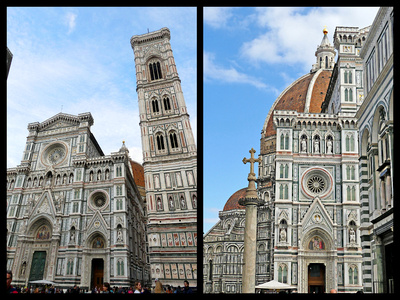 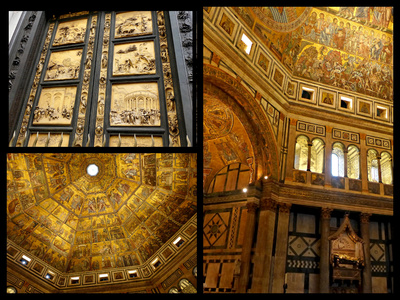 We did the Baptistery first thing in the morning – amazing and wonderful to see but it doesn’t take long as it’s just one fairly small open space. The Duomo itself is of course much larger although most of the ‘decoration’ has been removed to the museum. The most impressive part is the view of the dome – which even from the ground floor is pretty amazing. With the ticket you are also allowed to go down into the crypt, which had some interesting displays.

At our reserved time we got on line for the Duomo climb. As they only let people in every half hour, you are accompanied by quite a crowd as you ascend the 463 steps.  The frescoes are even more amazing up close – and the same  ‘human eating monster’ featured on the Baptistery ceiling is also here. Unfortunately you have to look through Plexiglas, which does detract. It was a fairly orderly climb till just before the open area at the top where it became a zoo – mostly due to people who felt they needed to take selfies up there. After elbowing our way past the selfish selfie takers we did enjoy the view. I think the view from the top of the campanile (414 steps) is even better as it includes the Duomo (and is way less crowded and crazy so the climb is more enjoyable). But no frescoes. So you really do have to do both. 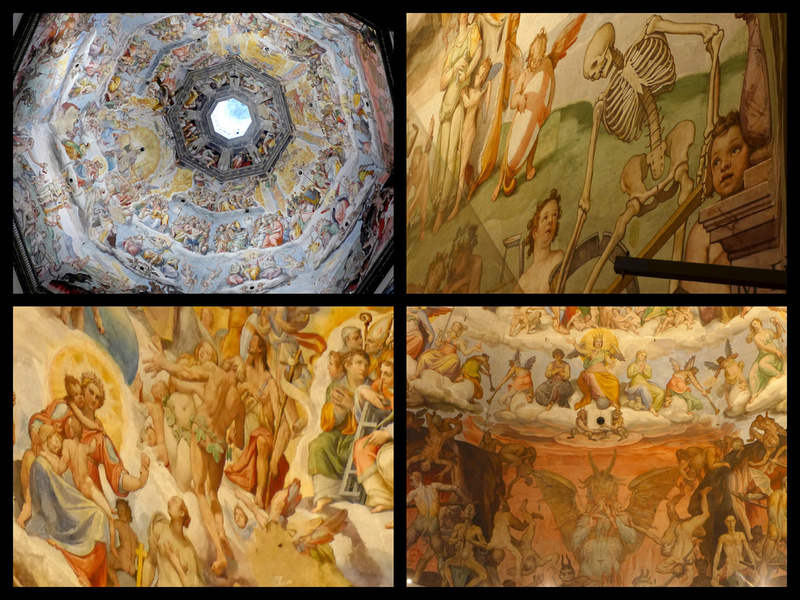 Close up of the frescoes on the Duomo ceiling including saints, sinners, skeletons and a human eating monster/devil creature. 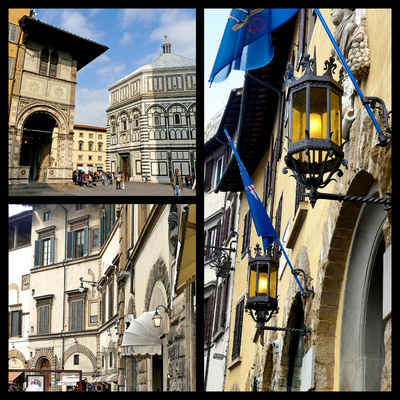 Around and beside the Duomo are Palazzos, stores and cafes.

A few blocks away, amidst more palazzos, is the Nouvo Mercato (now selling mostly leather goods to tourists) with the famous bronze boar, whose nose is shinny because people rub it for good luck. 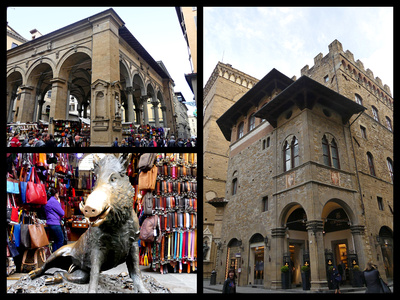 It’s only about a five minute walk to the other main piazza in Florence, the Piazza della Signoria which is home to the Palazzo Vecchio (town hall), the Loggia (originally built to shield dignitaries from the elements during speeches and ceremonies) and the Uffizi gallery, Florence’s major art museum. Guarding the entrance to the castle-looking Palazzo is a copy of Michelangelo’s “David”. I know many people feel you ‘need’ to see the original, but I actually think I prefer a copy in an original setting to an original in a museum. While David is pretty serene, just standing there looking good, most of the other sculpture is pretty violent. Perseus holds up the severed head of Medusa, The Sabine Virgins are Raped, Hercules slays the Centaur Nessus, and a large lion guards the whole area. Outside in the Piazza itself are Cosimo de Medici on his horse as well as Neptune and his fountain. 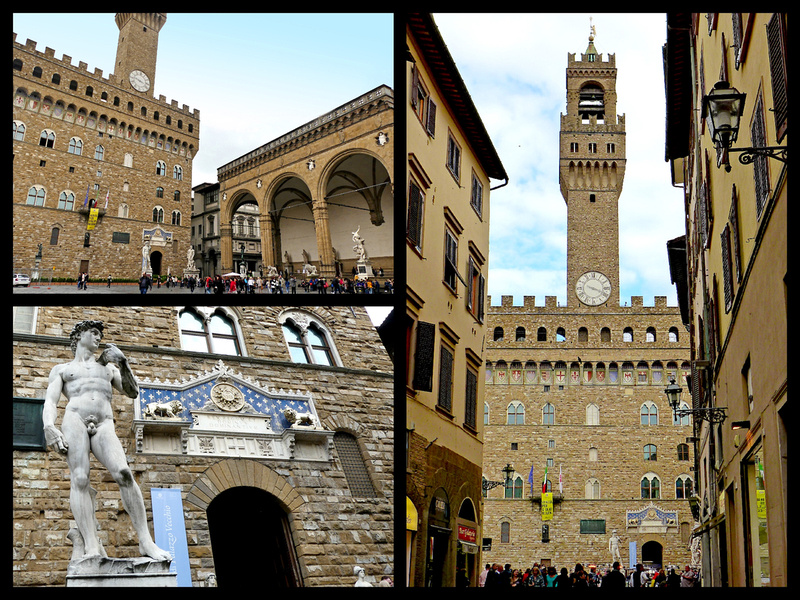 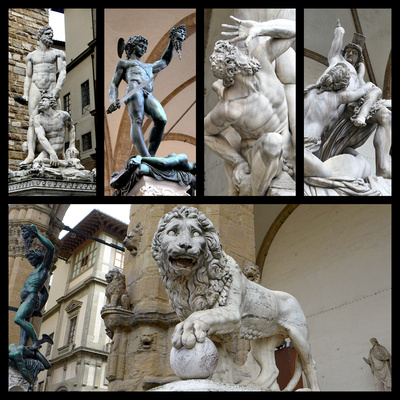 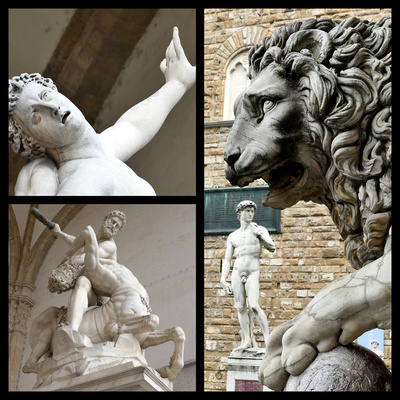 Just behind the Palazzo Vecchio is the U-shaped Uffizi Gallery (Italy’s top visited museum – long lines, reservations recommended. I had visited on my previous trip to Florence and we didn’t have time this trip). But the building itself is pretty impressive, and it opens out onto the Arno, with a view to the Tuscan Hills across the river, and the Ponte Vecchio, another of Florence’s ‘must sees’.  The bridge was built in 1345 to replace an even earlier version and has characteristic overhanging houses lining both sides. In the 16th century, it was home to butchers until Cosimo moved into the Palazzo Pitti across the river. He couldn’t stand the stench, so he evicted the meat cutters and moved in the classier gold- and silversmiths, and jewelers occupy it to this day. Apparently there is a way to walk from the Uffizi (which was offices, Uffizi means office) over the top level of the Pont Vecchio to the Pitti Palace with out having to interact with the hoards of people. Today there are still hoards of people – tourists from the time the jewelry shops open till late evening. So walking across it is not as rewarding as viewing it – which can be done from both banks of the Arno as well as the next bridge up. Ponte Vecchio was the only bridge spared by the Nazzi’s as they retreated from Florence, deciding it was too beautiful to blow up. 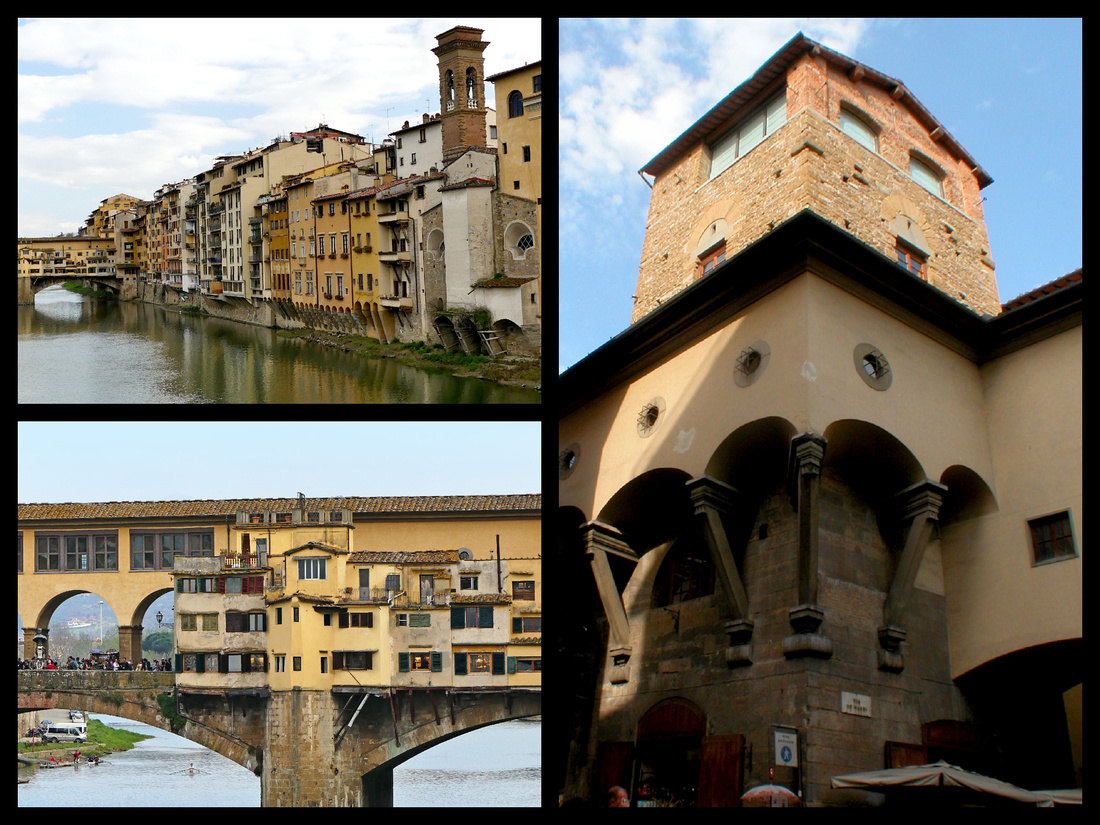 We walked to Santa Croce, another beautiful exterior (the Duomo buildings, Santa Maria Novello and Santa Croce are all pink/white/green marble and very ‘pretty’ compared to the dark Siena colored stone of most of the other buildings in Florence – made even darker and more somber looking by the fact that it was cloudy). Considered Florence’s second most important church after the Duomo it sits at the eastern edge of the centro storico in one of the most ‘genuine’ neighborhoods left in the center. It’s often referred to as Italy’s “Westminster Abbey’ for the number of it’s highly decorated chapels and the tombs of some of the most important Italians of their day: Michelangelo, Dante. Galileo, Machiavelli, Rossini. The side chapels, 16 of them, richly frescoes (many by Giotto), go on and on, as do the cloisters. There is also a leather school, which although no longer staffed solely by monks, does still produce leather products. 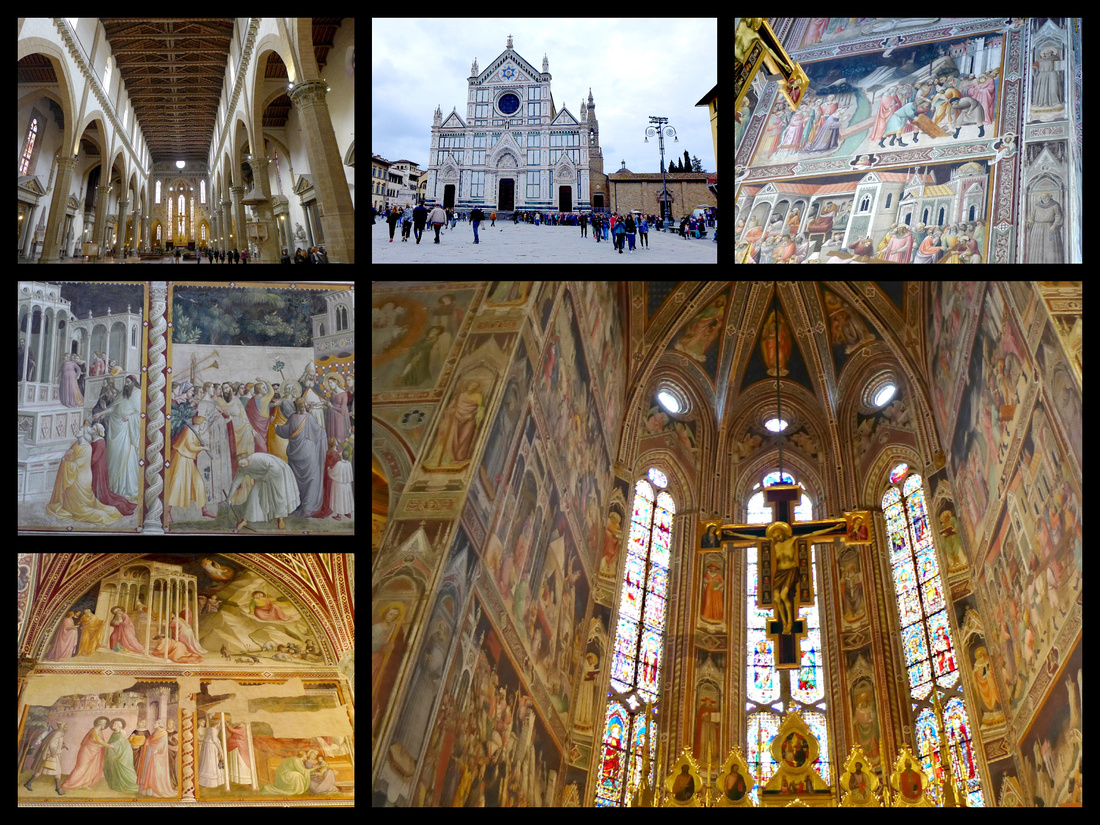 From Santa Croce we hiked up to Piazzale Michelangelo and Santa Maria al Monte above that. Great Views (despite the clouds). The church is quite dark inside and has a very different feel to most of the other churches in Florence. 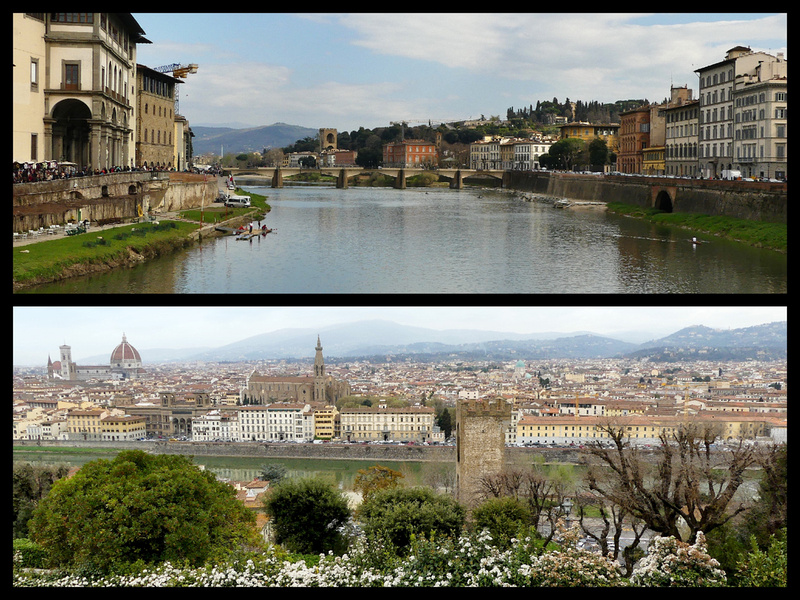 We got a great sandwich which we shared and two cappuccinos  for €7 and ate on a bench in Piazzale Michelangelo.

Back in town we wandered over the Pont Vecchio but the jewelry was above our pay grade so we went back to the San Lorenzo market. I was tempted by the bags – Florence is pocketbook shopping heaven - Crista got a large light leather tote bag with matching bag inside and smaller pouch. But I resisted and only got a few smaller pouches for camera accessories etc.

We had dinner at a restaurant near the Pont Vecchio but it was quite decent pasta and grilled veggies. 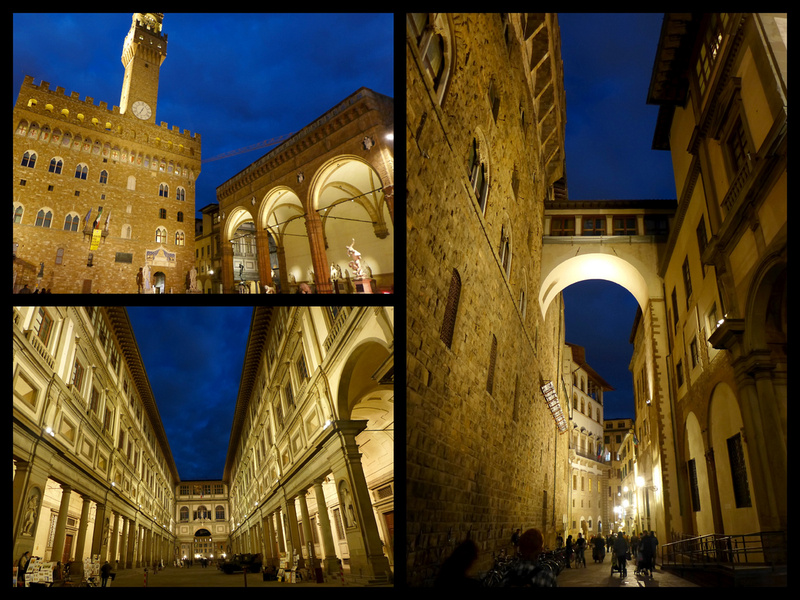 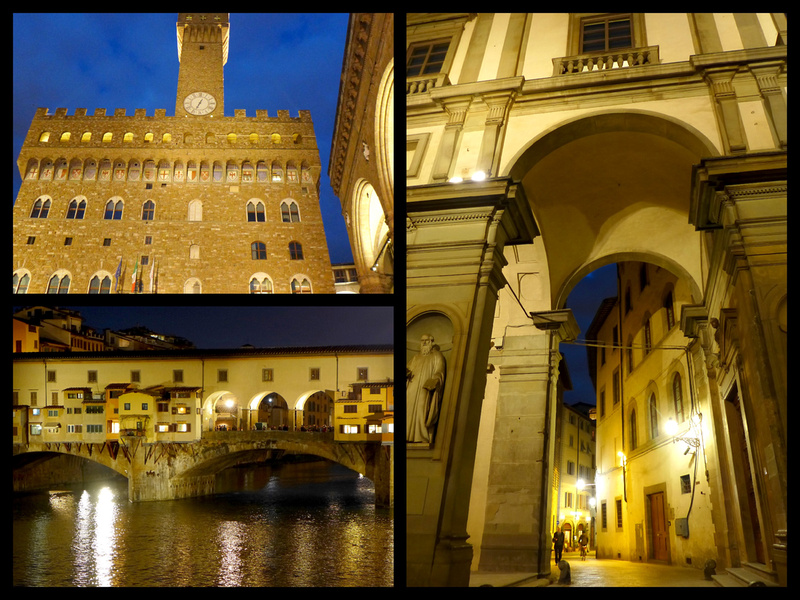 Thursday, March 23, 2017    [Cloudy in Florence, Mostly sunny, high 60s in Rome] - After breakfast we took a stroll around the historic center and climbed the Campanile.

Then Santa Maria Novella –the third of the ‘white, pink and green marble’ churches in Florence. There were some interesting cloisters. While not quite as impressive as Santa Croce in terms of amount of frescoes, the ones they did have were more interesting as they included scenes of Florence and surrounding areas. 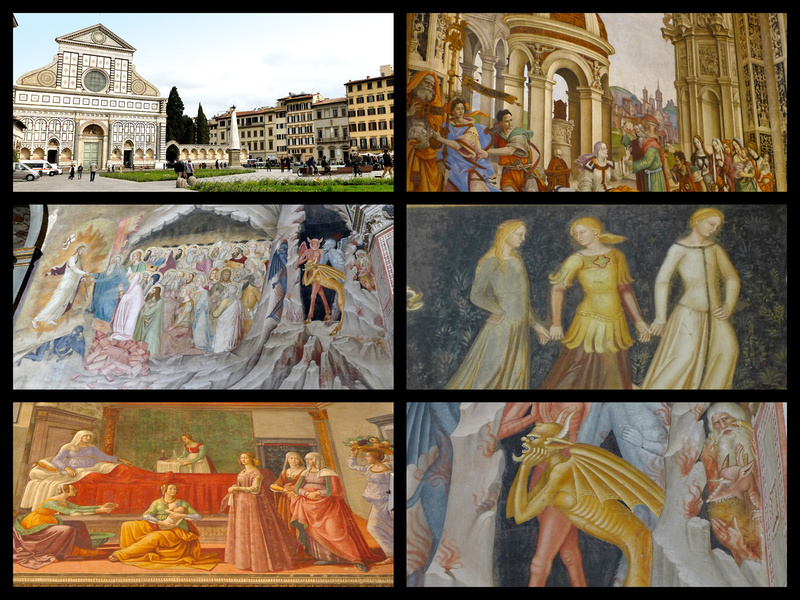 Just before the trip I had read a novel by Sarah Durant set in 15th century Florence which featured a family that hired a painter to paint the family’s palazzo’s chapel with frescoes. The painter used the family members as models for the faces of people in the frescoes, and scenes from the area. So this was apparently a common practice, at least in residential frescoes. I found it interesting to wander the streets of Florence and imagine what is in all those palazzos. Now I know many of them are carved up into apartments, or offices, etc. but originally they were ‘family homes’. Having read the novel, “The Birth of Venus” did certainly help to bring 15th century Florence alive. Sarah Durant has written numerous other historical novels set in various Italian cities (“In the Company of the courtesan” 16th Century Venice; “Sacred Hearts” 16th century Ferrara, etc.).  Also watching movies set in places I’m going to visit is a good way to get a ‘feel’ for a place. For Florence one of the best is “Room with a View”. A more recent one is “Inferno” with Tom Hanks based on the Dan Brown novel.

For the Venice, Rome and Milan portions of our trip see parts 1,3, and 4 of "Italy through new eyes: Chasing the Sun in Italy in March"

For more photos click on "All Photographs in the upper right corner and navigate to the Italy gallery.