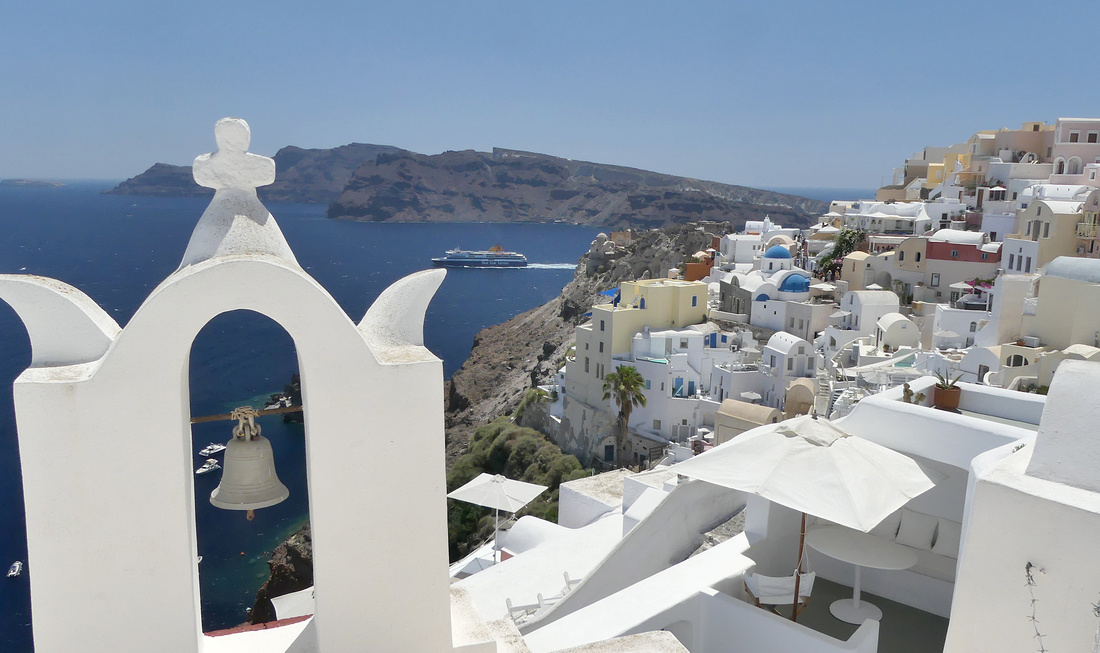 This was my third trip to Greece and my goal, other than just being on Greek islands, was to experience some slightly less popular islands. Previous trips included Santorini, Naxos, Paros and Crete - all of them among the most popular. Since I’d already been to Santorini on a previous trip, I really only scheduled time there because logistically it made the most sense to fly in and out  of it to get to the other islands I wanted to see, but once there I realized I was really enjoying my time. It may not feel ‘authentic’ (whatever that means) but it sure is beautiful and I easily filled up the 2-3 days I had and would even have enjoyed more. I scheduled one full day between ferry and flight in each direction just to be safe, I actually wish I had added at least one more day.

I took  SeaJets fast ferries between all the islands, booked on line well in advance. Then I started to worry as I read how awful they were. I had read things about how they throw your luggage in a huge heap and you can't get yours out from the bottom of the pile if you are one of the intermediate stops (and I was), and that the boats don't sail if it's very windy - and it seemed pretty windy, and that people get sea sick. On my first trip from Santorini to Folegandros none of that happened. It was like a gigantic, roomy airplane cabin. The trip from Folegandros to Milos was pretty bumpy and someone in the section in front of mine did get sick (although the crew had an efficient method of cleaning it up) and even I felt a bit queasy (and I rarely have a problem with motion). The last two trips were smoother but totally full with luggage blocking aisles, etc. All in all, it is an efficient way to get around the islands – most of my trips were under an hour, compared to over 2 hours on the slower ferries, but the slower ferries where you can sit out on the deck and watch the world go by are so much more enjoyable. (see photos at end)

Santorini – Σαντορίνη   population 15,500, is in a class by itself – no other island comes close – which is both a good thing and a bad thing. The scenery – both the setting and the buildings, which have been built onto it – is unique and gorgeous. Curving around the caldera the towns of Fira – which almost blends into Imerovigli and Firostefani, and then further on Finikia, which blends into Oia – cling to the side of the hill, literally spilling down the sides. White cube houses, blue domed churches, white and grey stairs connecting buildings, the occasional earth tone pink or gold building all combine to form one of the most striking landscapes I’ve ever seen. Almost every structure is a hotel, restaurant or shop. All the ‘regular’ people live in one of the inland villages. But while it is so striking and gorgeous that it’s definitely worth visiting, it really doesn’t feel like actual towns.

The highlight of Santorini is the village of Oia, population 1500, at the far tip of the island. It is smaller and quieter than the main town of Fira, and while all of Santorini is picturesque, this is the ultimate. 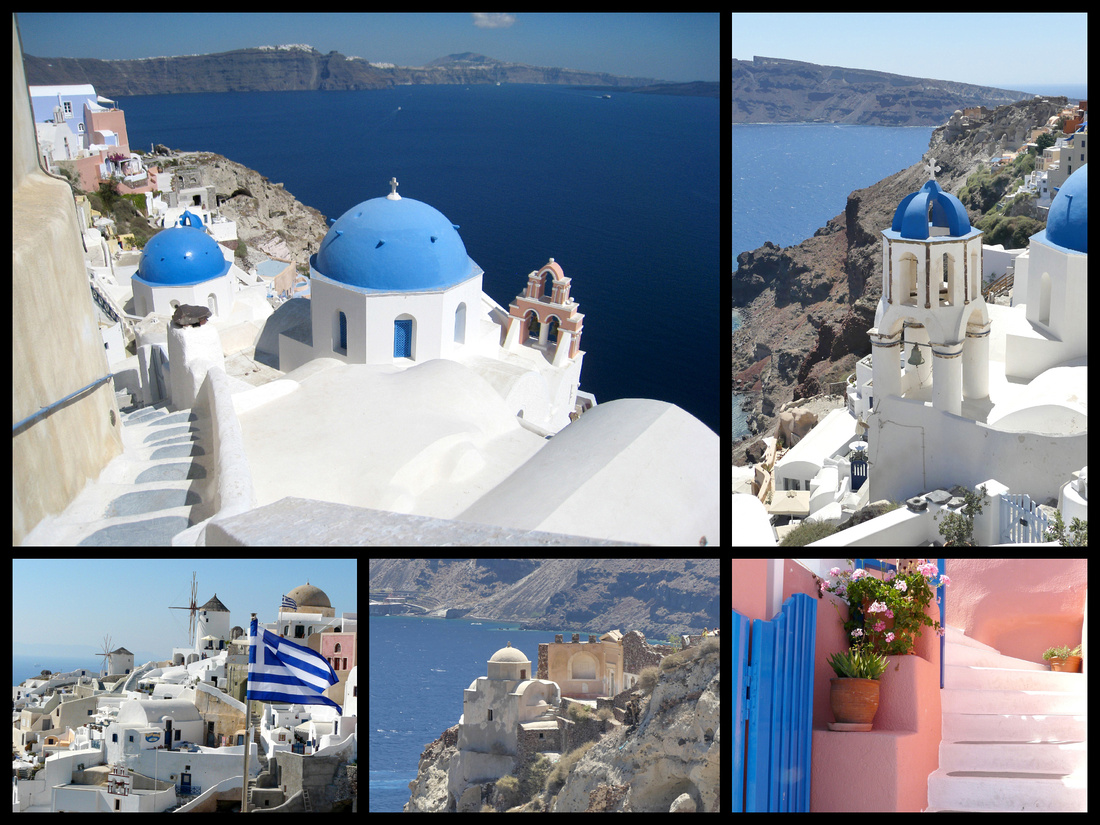 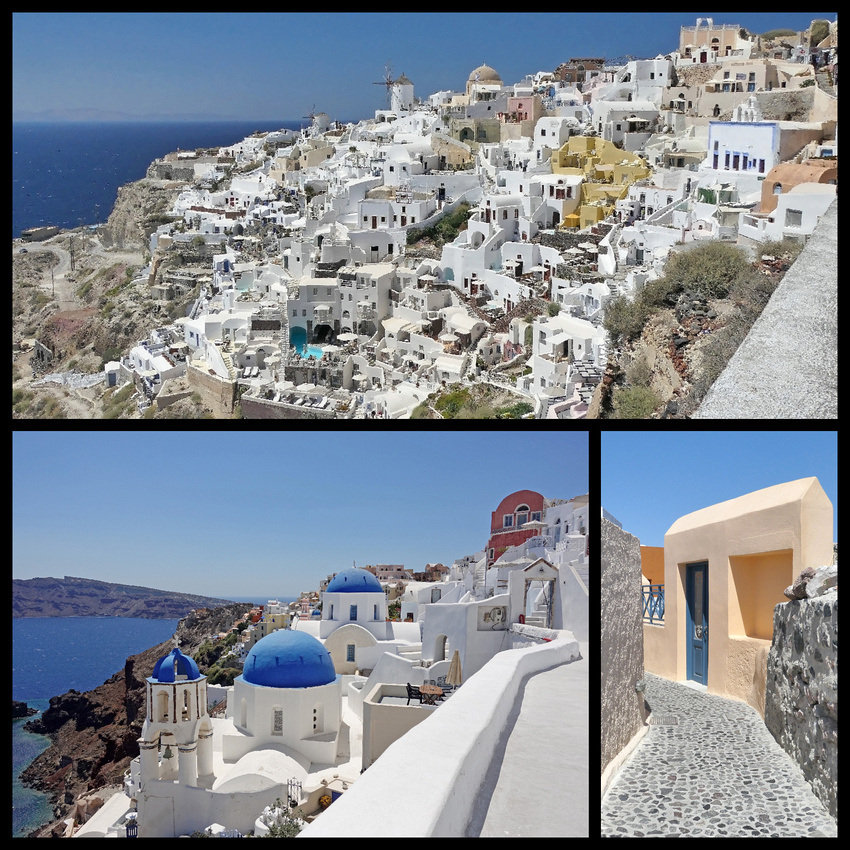 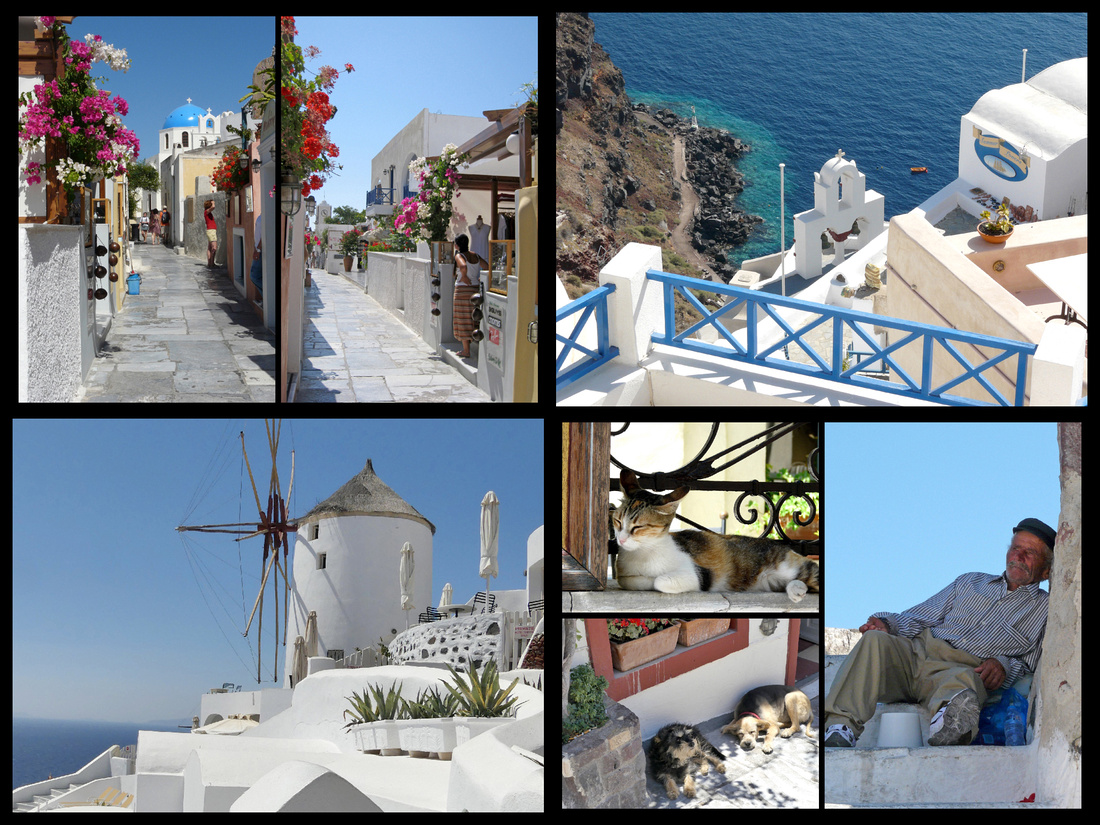 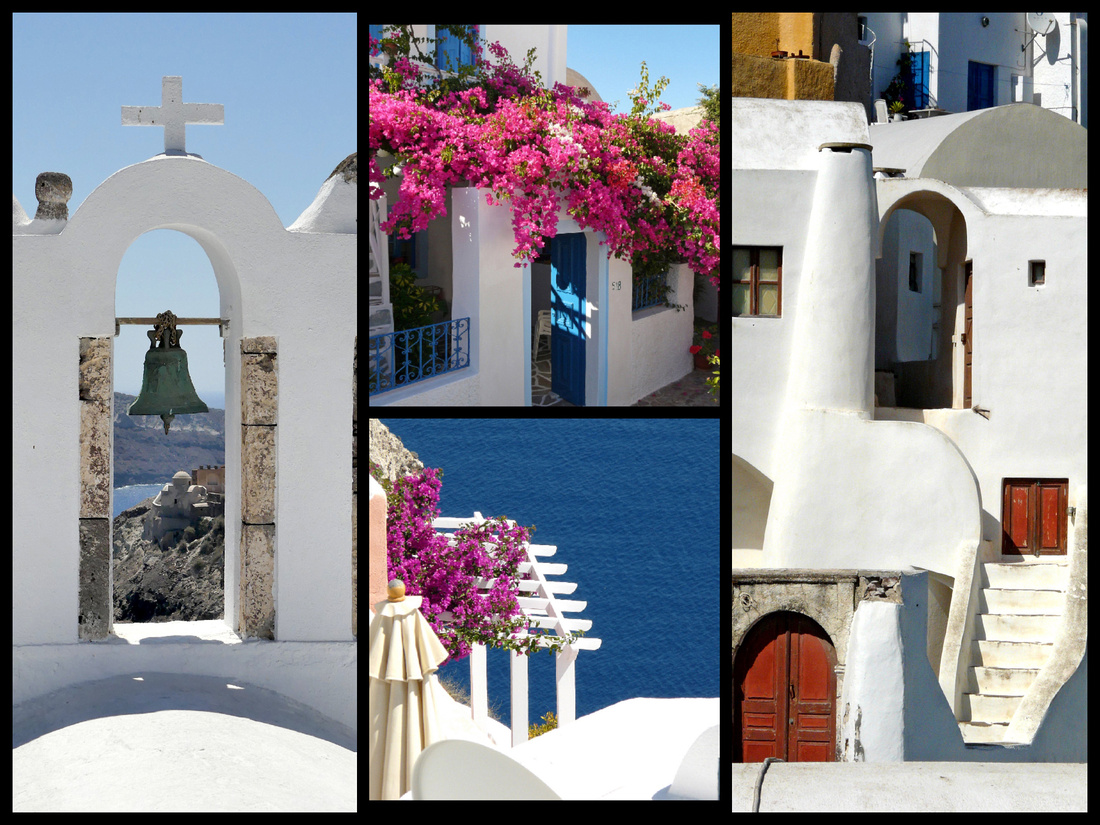 Finikia was once a distinct village but now blends in with Oia. 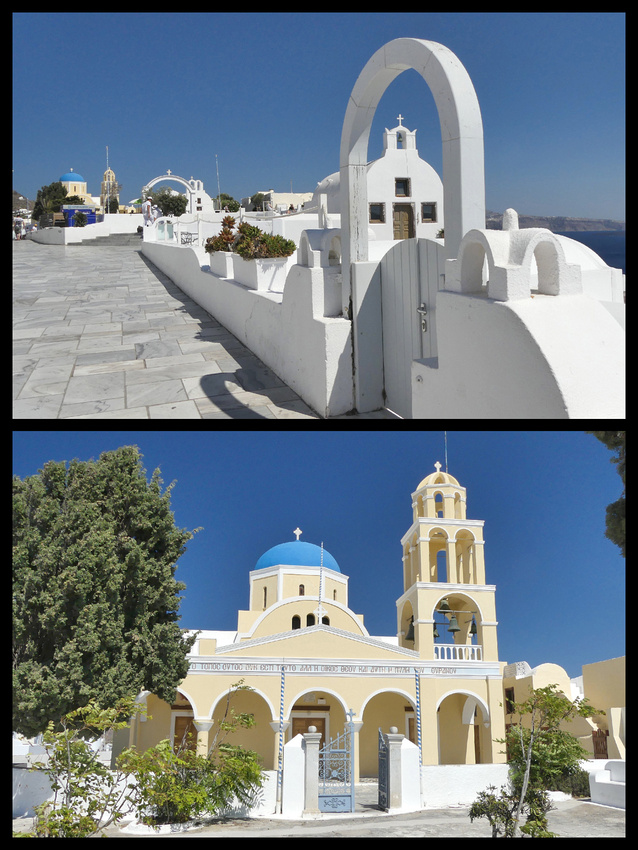 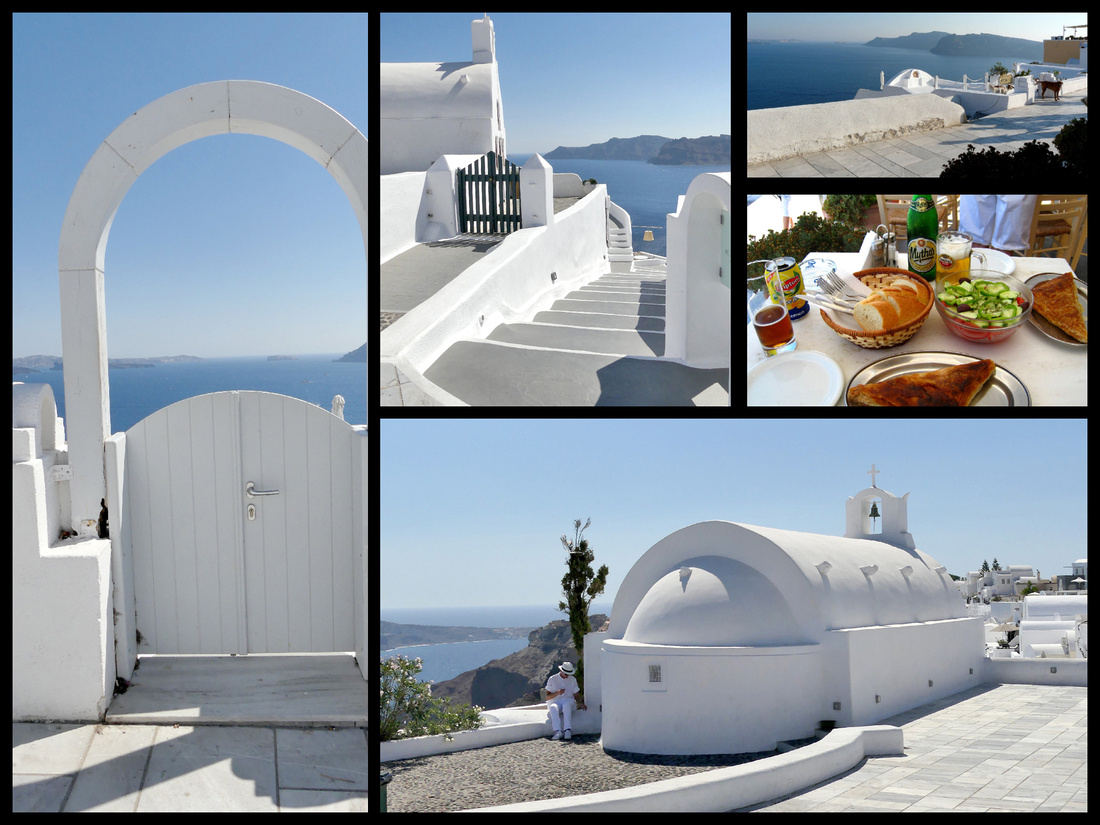 The main town, Fira, with a population of about 2000, is really just as gorgeous as Oia. And actually the view of the caldera itself is better than that from Oia. What were once the two distinct villages of Firostefani and Imerovigli now blend in with Fira and the walk from the center of Fira to the edge of Imerovigli is my favorite. Fira has, by far, the most restaurants, hotels, shops, etc. and is the transportation hub with the main bus station (which is essentially a large parking lot and a couple guys directing people as to which bus they need to get). 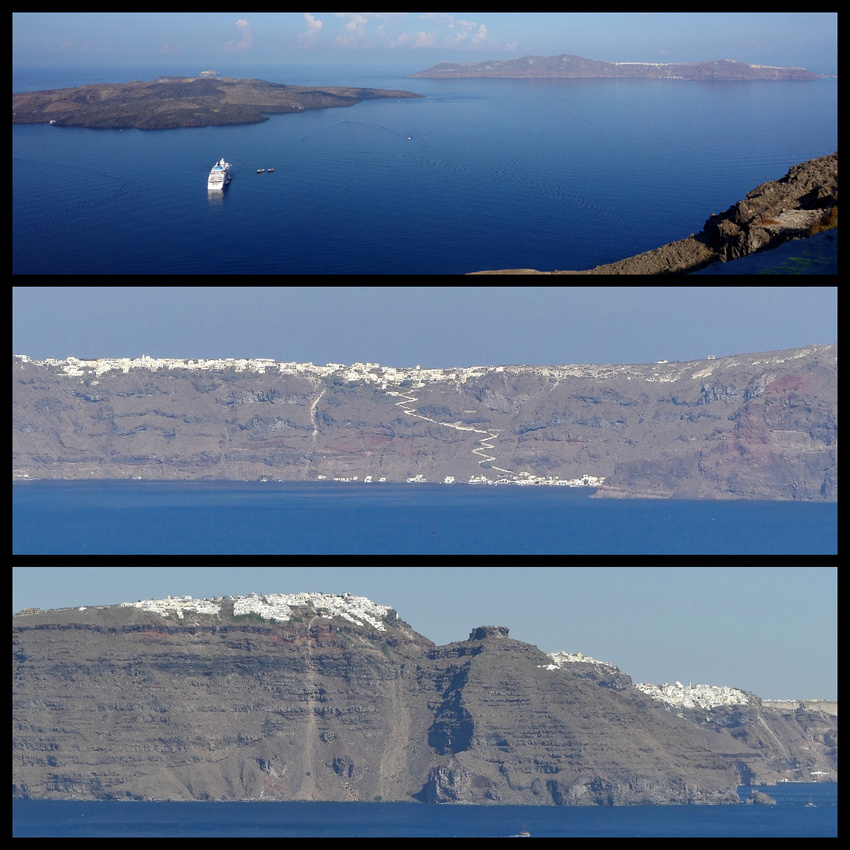 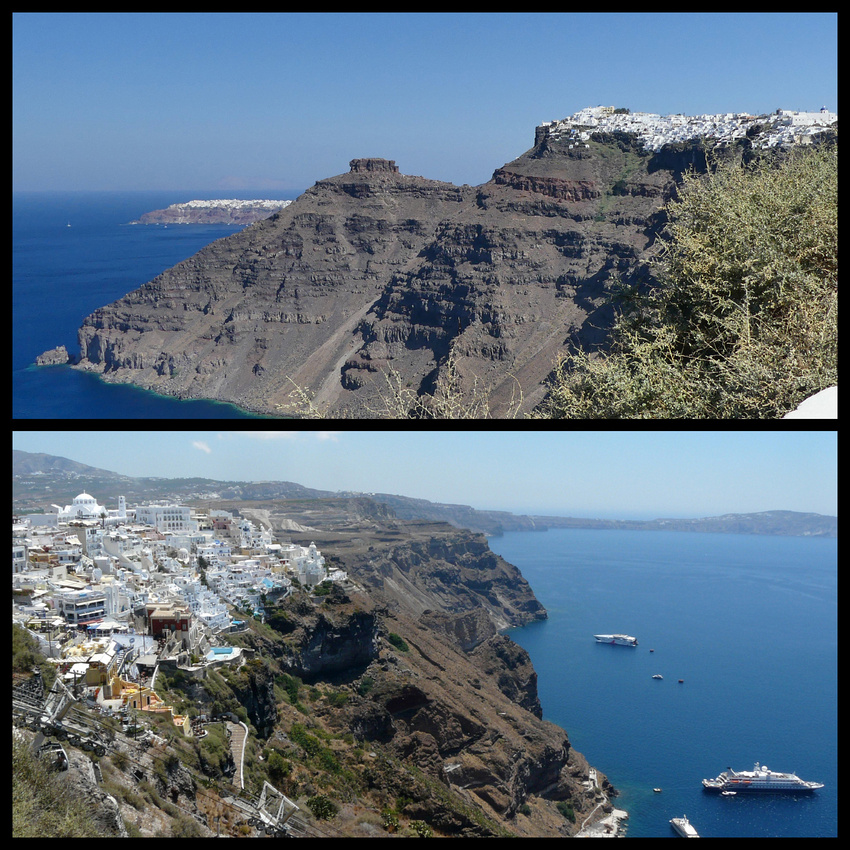 Top: Fira in the foreground with Oia in the far distance.    Bottom: The main town of Fira, perched on the hill high above the caldera

Σαντορίνη, pronounced [sandoˈrini], officially Thira, Θήρα, is the remnant of the ancient (3,600 years ago) volcano, one of the largest eruptions (known as the Minoan eruption) in the history of the world, felt as far away as Scandinavia. The land that remained, the caldera, almost encircles the huge lagoon. This may have led indirectly to the collapse of the Minoan civilization on the island of Crete, 110 km (68 mi) to the south, through a gigantic tsunami. Another popular theory holds that the Thira eruption is the source of the legend of Atlantis. 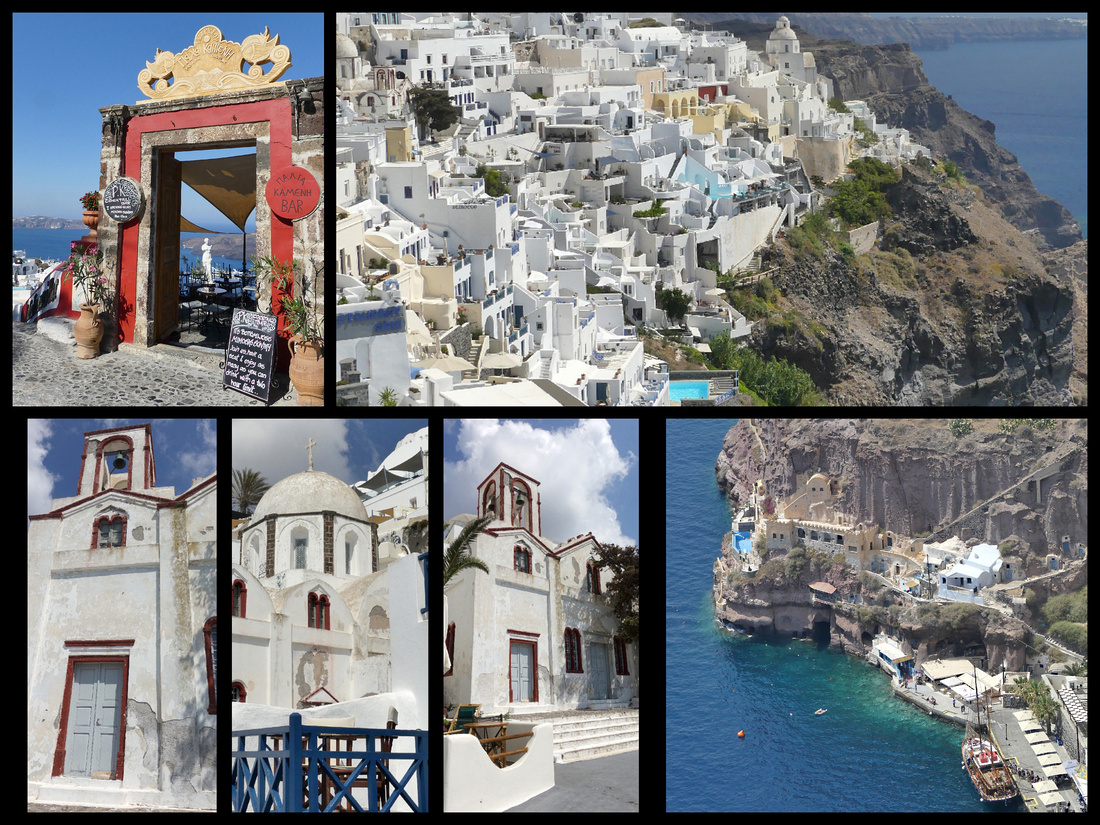 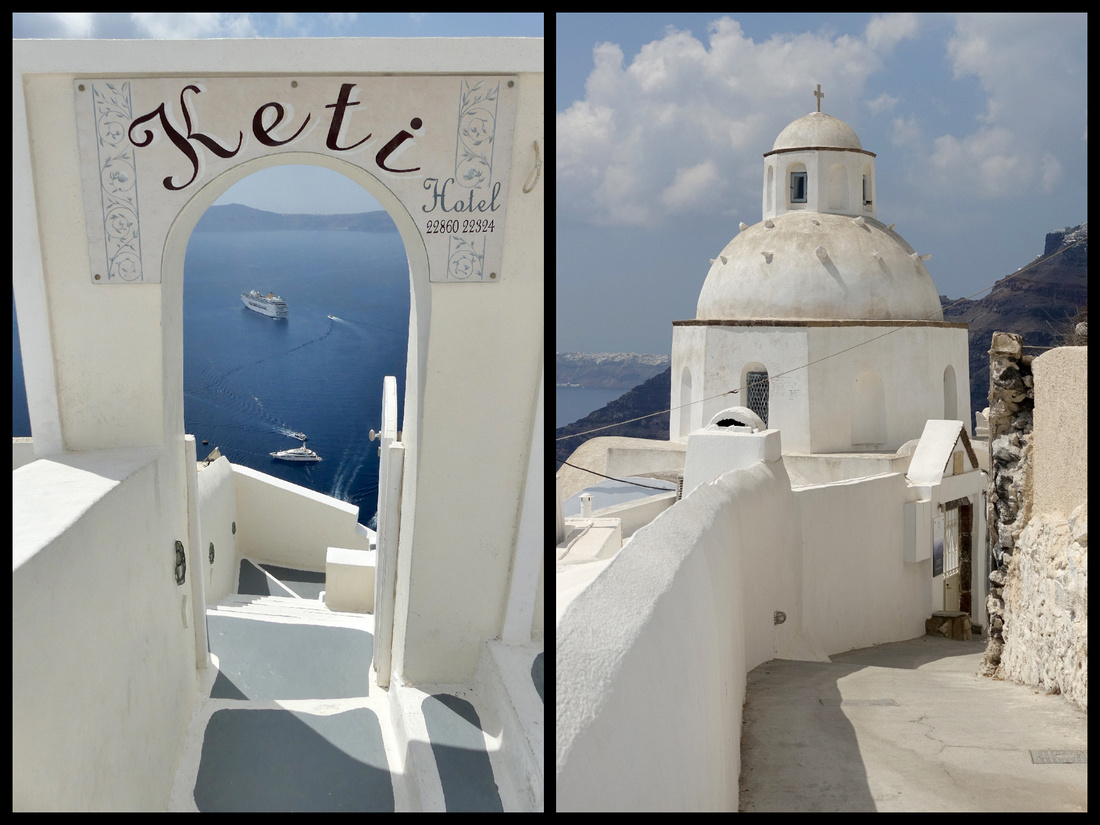 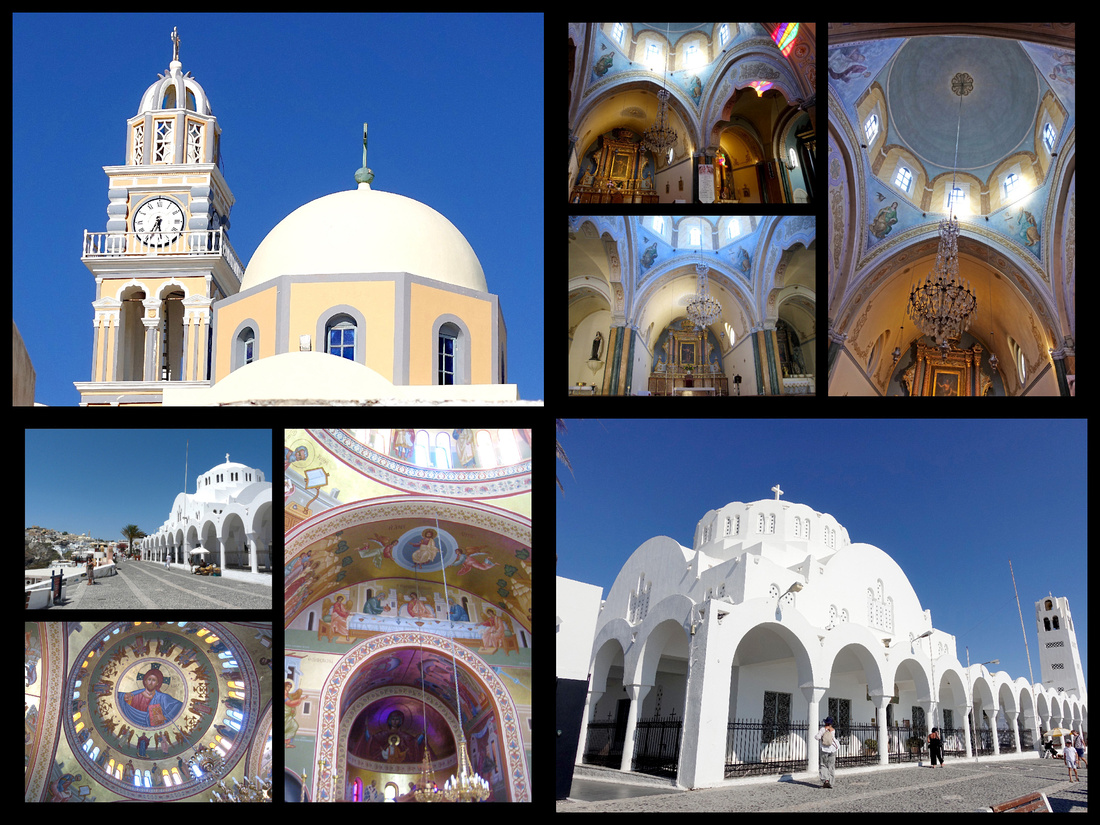 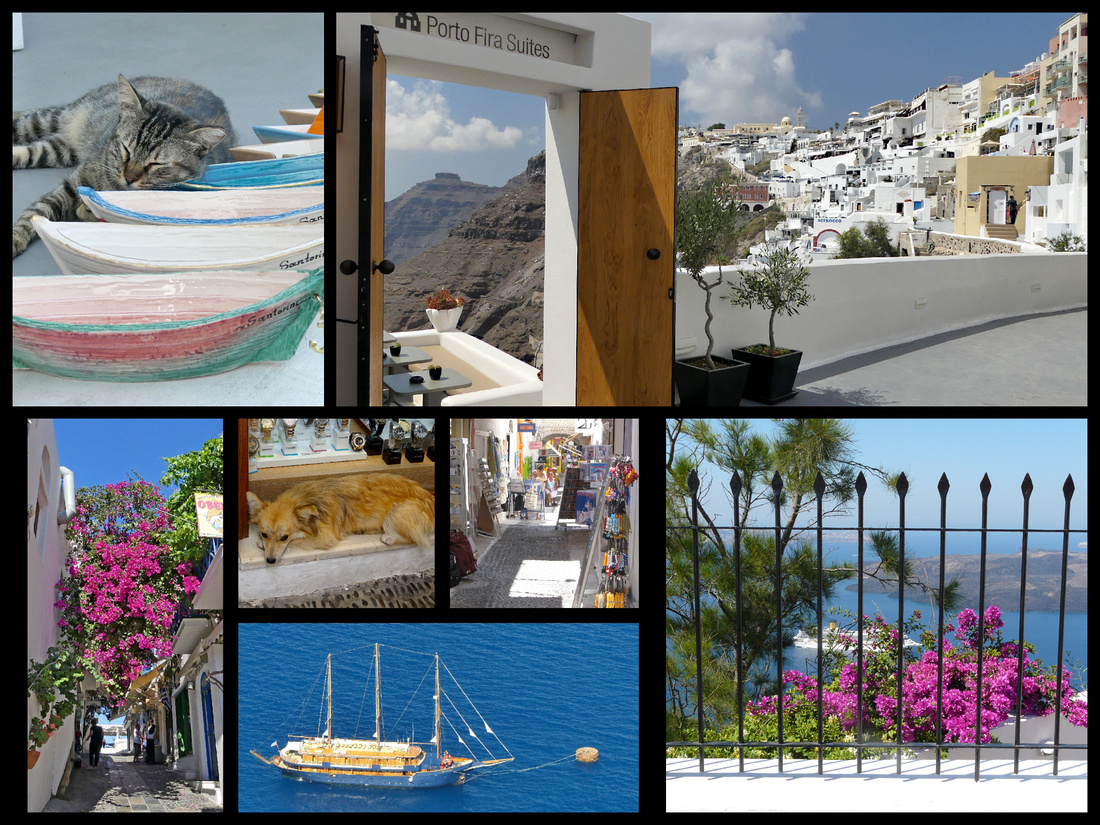 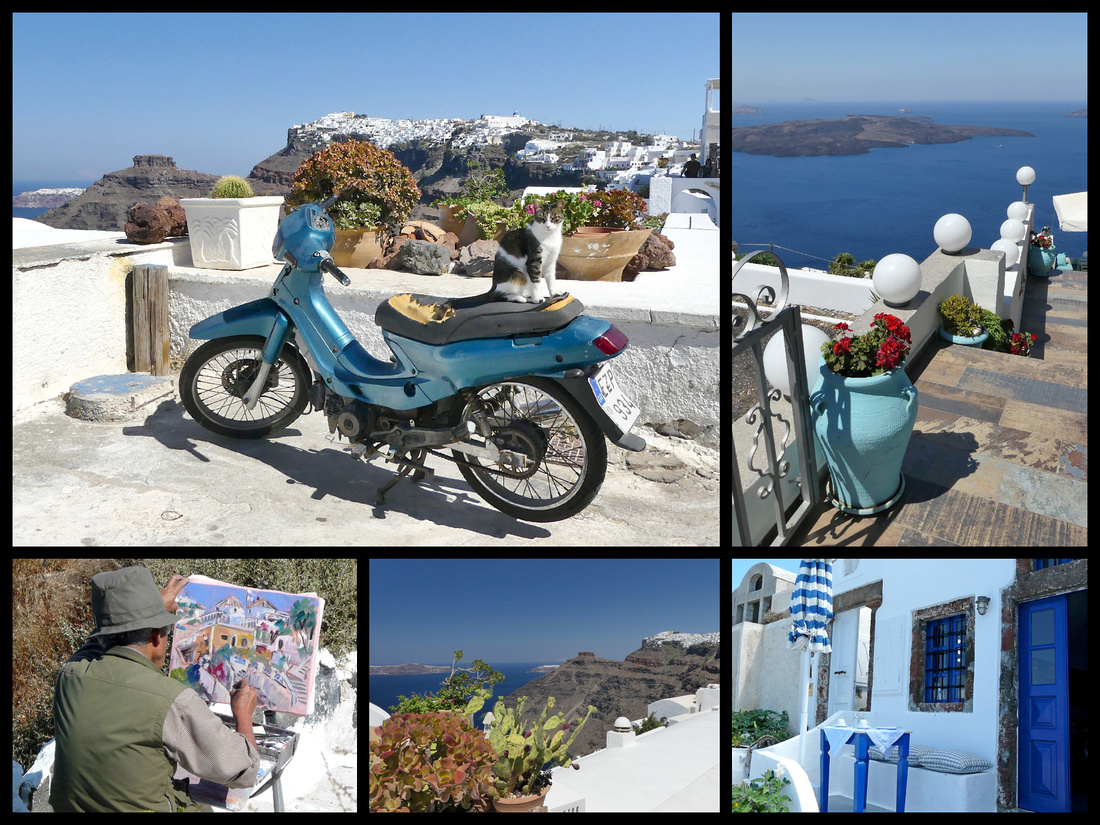 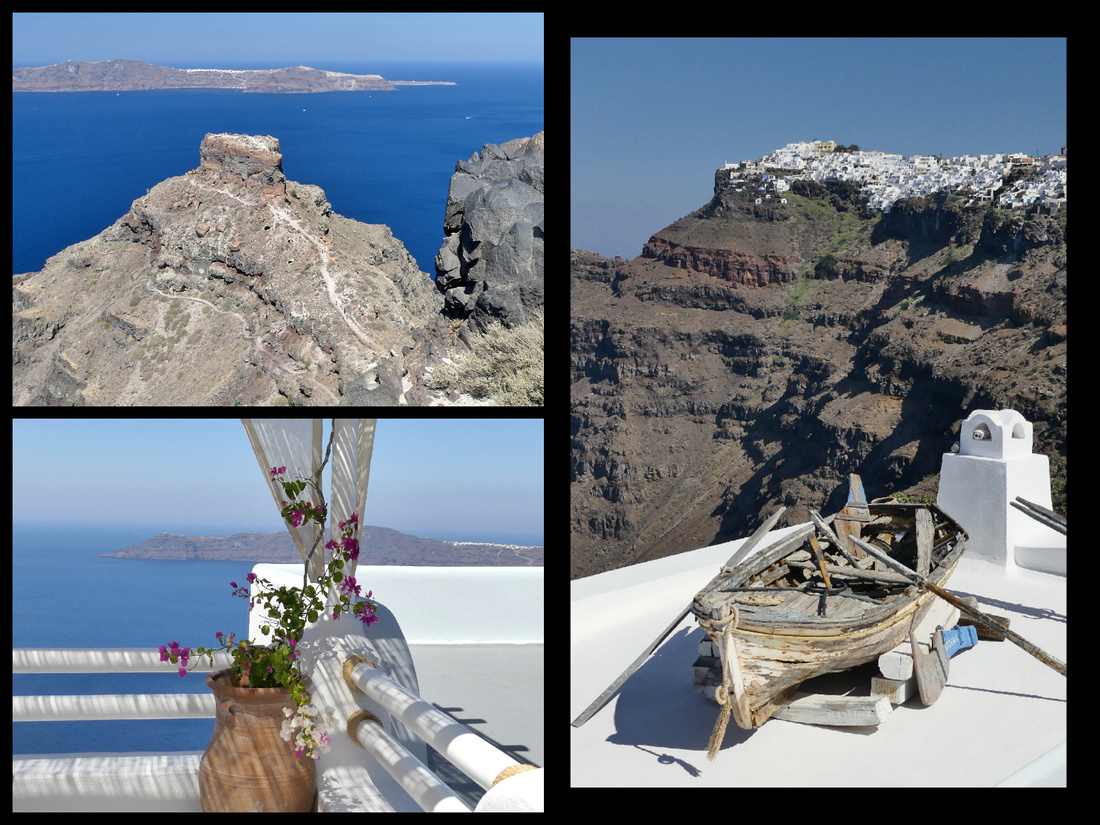 Between Firostefani and Imerovigli 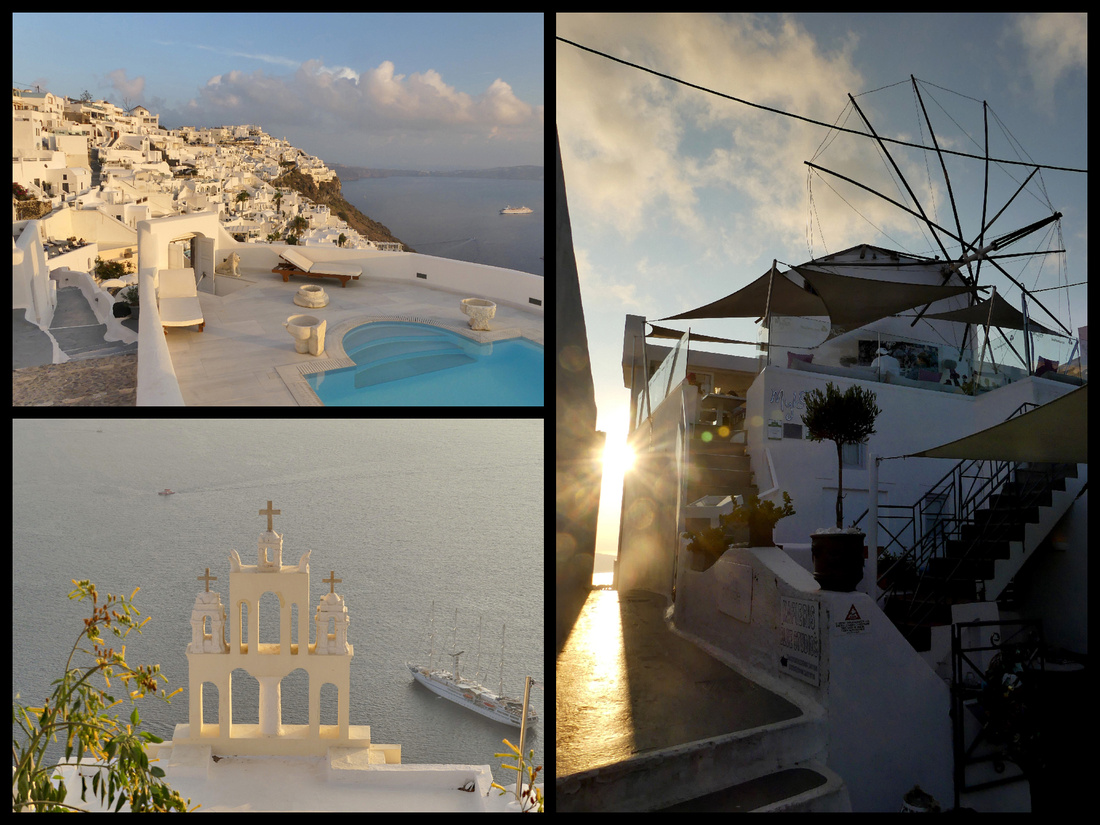 Santorini gets 1.5 million visitors a year. There seem to be three types of tourist – the cruise shippers who arrive by little skiffs from their mother ships anchored in the center of the caldera, and then take the cable car (or a donkey) up. They shop, eat, look at the view, and then go back down without ever venturing more than a few feet from the cable car but when they are there (one day there were five cruise ships in the caldera) they definitely overwhelm the place. Then there are the people staying in the boutique hotels with a view, and many with tiny pools; they also shop and eat at the expensive restaurants with a view. Then there are the ‘other’ tourists, who are staying in the ‘low rent’ (although this is a relative term on Santorini) district in from the caldera – small hotels and ‘rooms’ as well a at least one campground and a few hostels. The main street and square are full of inexpensive eateries, people driving ATVs and mopeds zipping around. Very chaotic, but in a nice way. 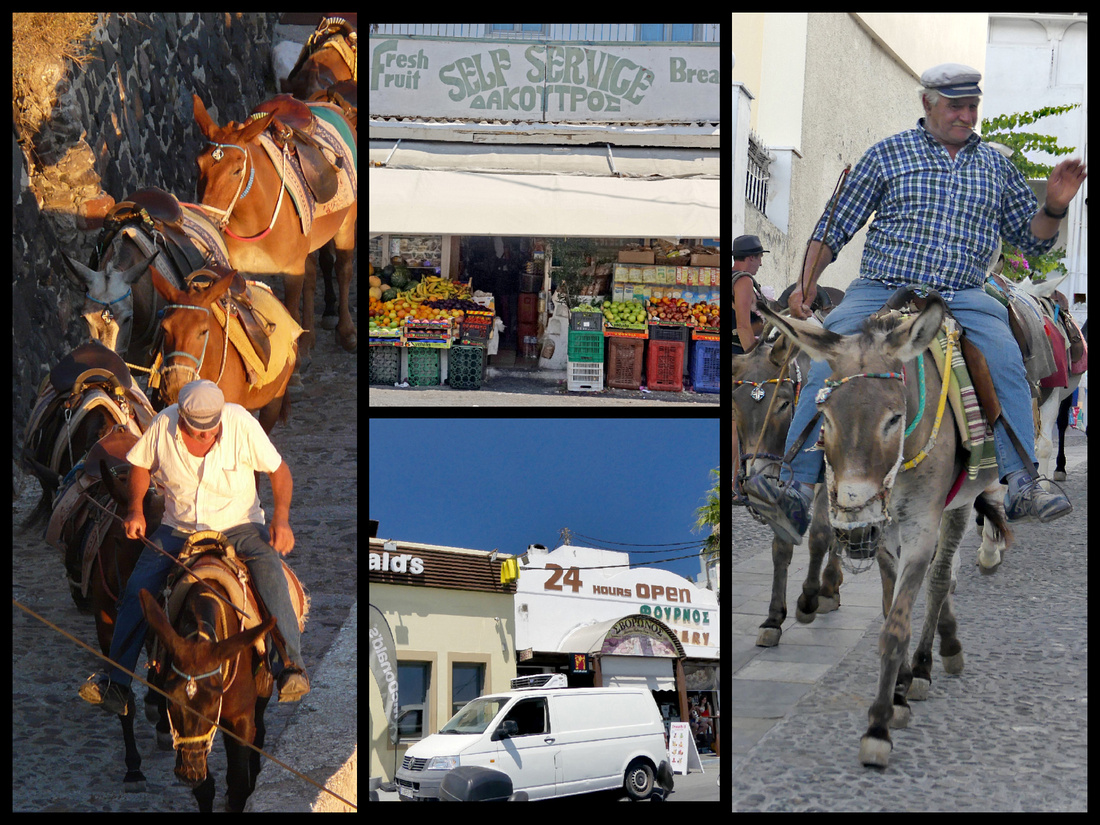 Left: Donkey's being led down to the cruise ships to haul people up the hill (photo from 2009)    Far right: same guy in 2018
Center: Fira has several fruit/veggie/nut shops as well as a great bakery that is open 24 hours, a McDonalds, a grocery store and plenty of restaurants

Large buses (more like inter city coaches than city buses) go back and forth between Fira and Oia about every 20 minutes so you don’t even need to be aware of the schedule. They also go to the various inland villages, which are interesting and feel much more authentic, as well as to the few beaches on the other side of the island from the caldera and to the archaeological site, Aktrotiri. The inland towns (where the people who work in all the hotels, restaurants and shops live) are worth visiting.

Emporio is the largest inland village with over 3000 residents, in the south center of the island, about 12 km from Fira. The village was probably named Emporio (which means trade) because it was the center of the island's commercial affairs in the past. There is a 'newer' part of town, where the bus stops, which is where many of the people who work in all the shops and restaurants in Fira and Oia actually live.

Emporio also has a ‘castelo’ district that has no shops/restaurants at all, just ancient houses and very narrow twisting lanes. It was absolutely beautiful. I did go fairly early (before 10) and I was totally alone. The 'castle' sits at the highest point of the town and was originally built to guard the transactions and the residents from the pirate invasions which were common in the Cylades. There were once five fortified settlements on Santoroini. Emporio's castle was constructed in the mid 15th century and was very well fortified and structured: the houses were built side by side and connected by overpasses, arches and tunnels. The interior remains a labyrinth with very narrow streets  only one person wide. There are steps, doors, small windows and arches everywhere. For safety reasons there was only one  entrance, today there are a couple of ways in. Inside the fortified settlement are several small churches, the largest, the church of Panaqia Mesiani, dates to the 16th century. 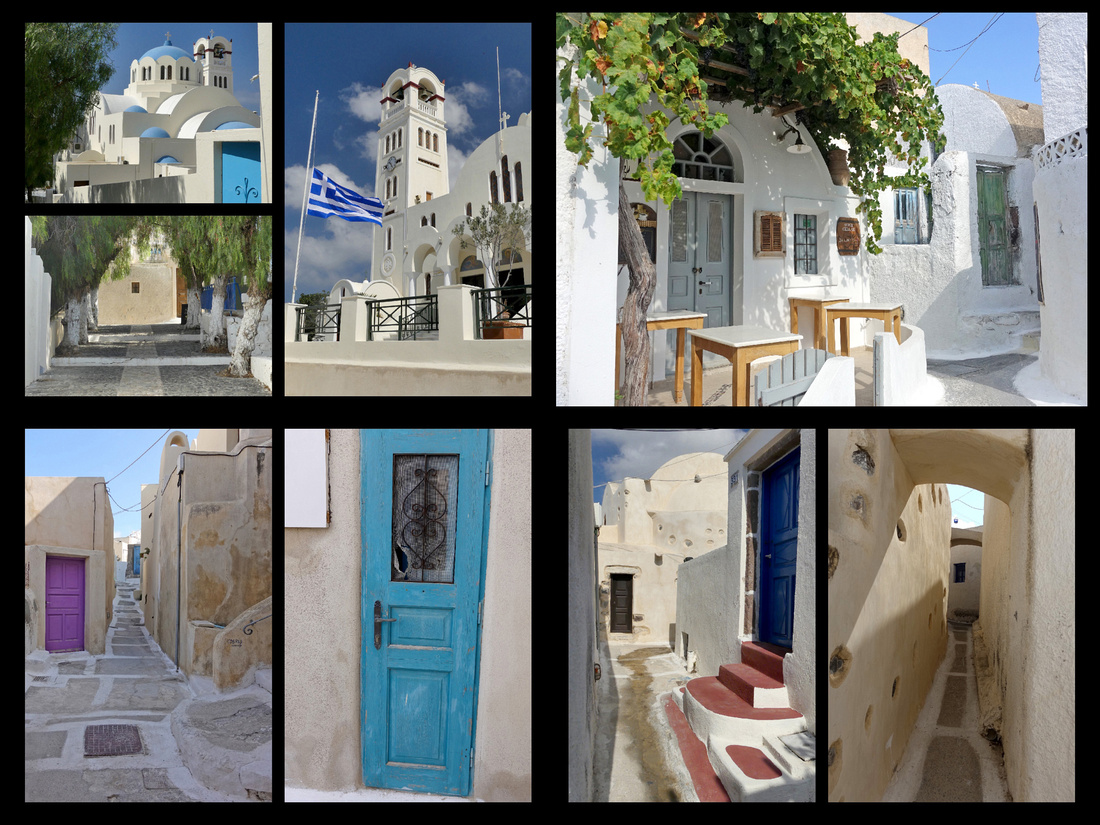 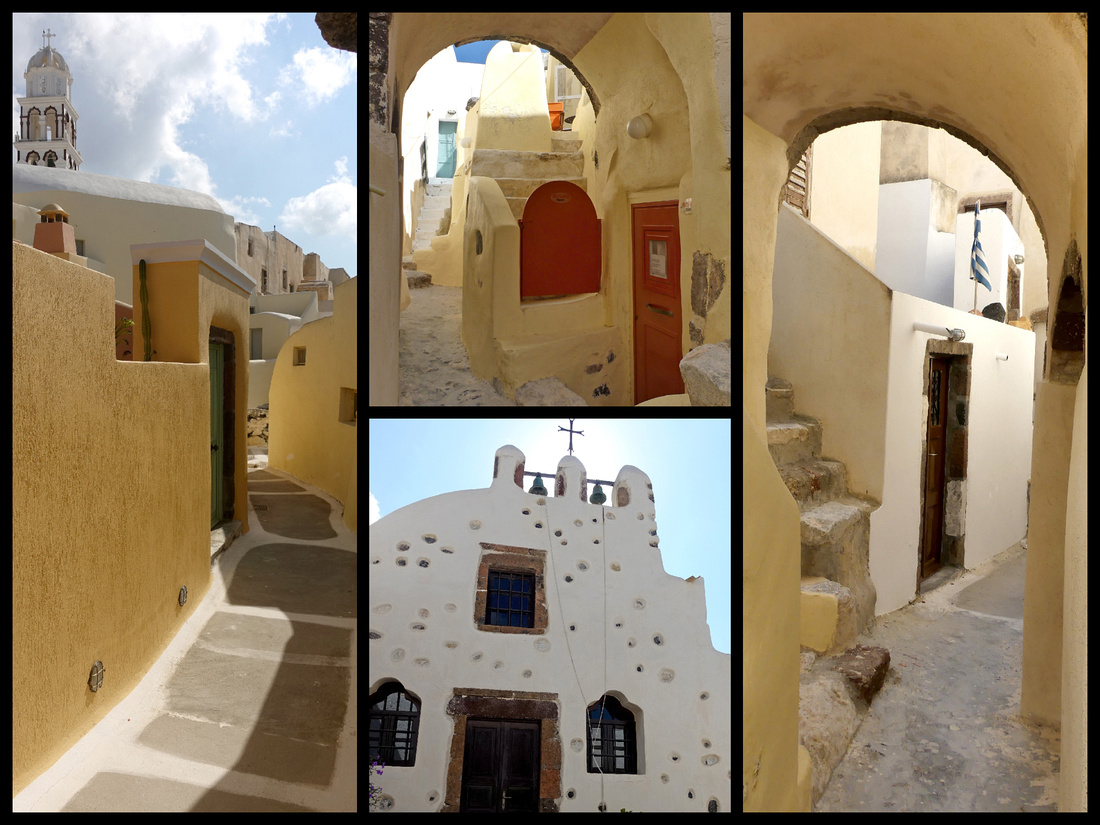 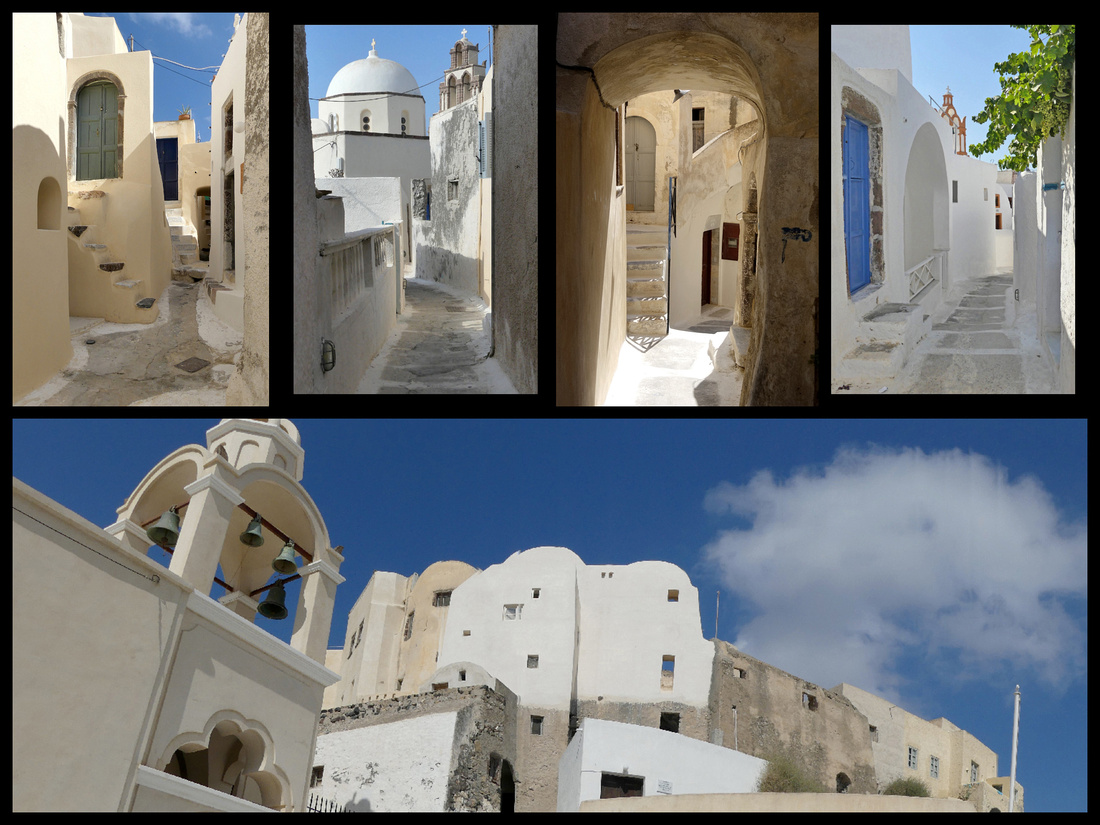 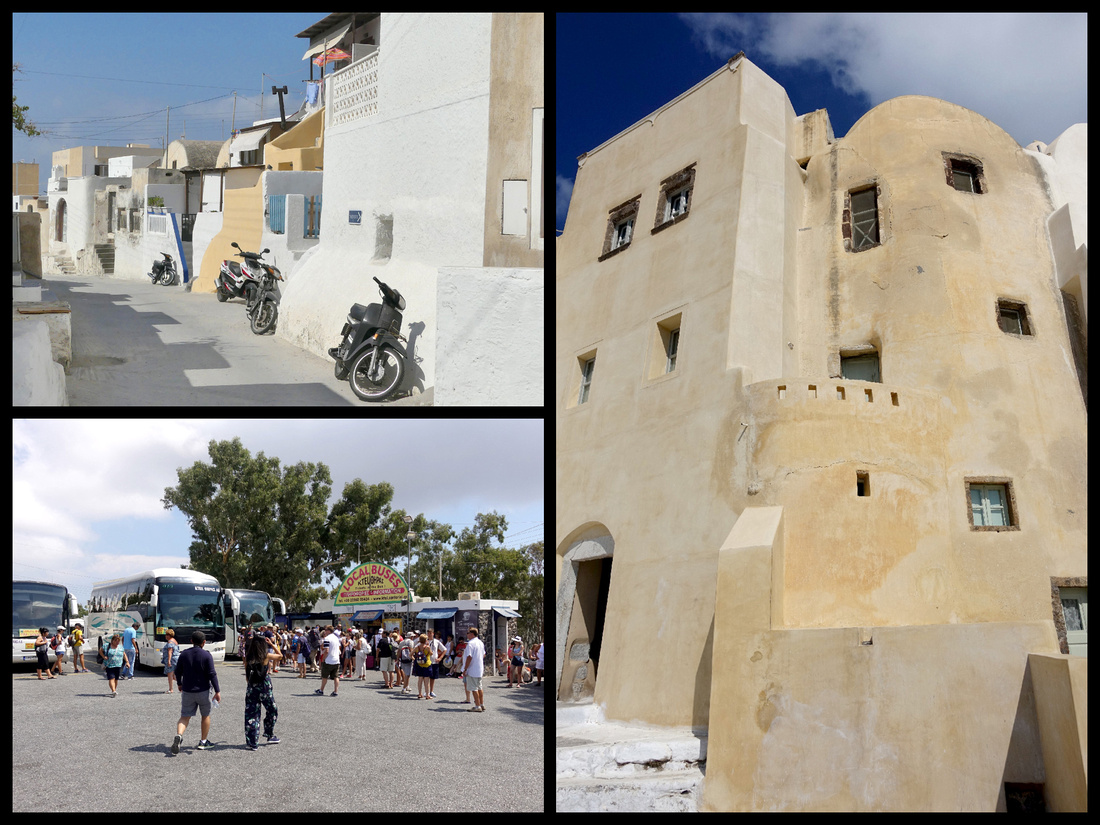 Emborio castle from the outside,  Bus station back in Fira

Pyrgos - Less than 8 km from Fira, at one of the highest points on the island, Pyrgos (population 912) is a typical fortress settlement, another of the inland villages where the islanders actually live. It's topped by the ruins of the Kasteli and offers views of Fira and the sea on both sides of the island. From the bus stop in the main square, narrow, winding streets lead past white houses with blue doors, and small (and at least one not so small) churches to the ruins of the 13th century Venetian castle (Kasteli). Though the occasional tour bus hauls cruise ship passengers on an excursion to the village, other than one or two postcard or jewelry shops, for the most part it remains mostly untouched by the mass tourism of the caldera rim villages. 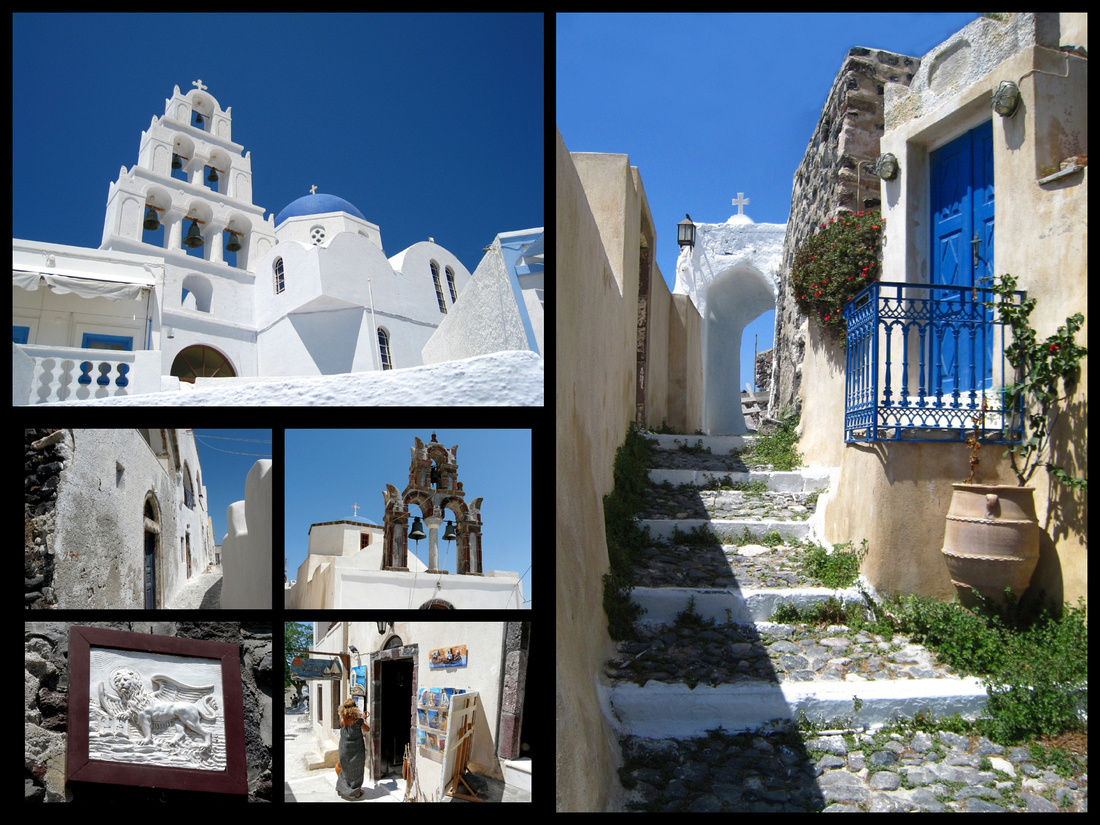 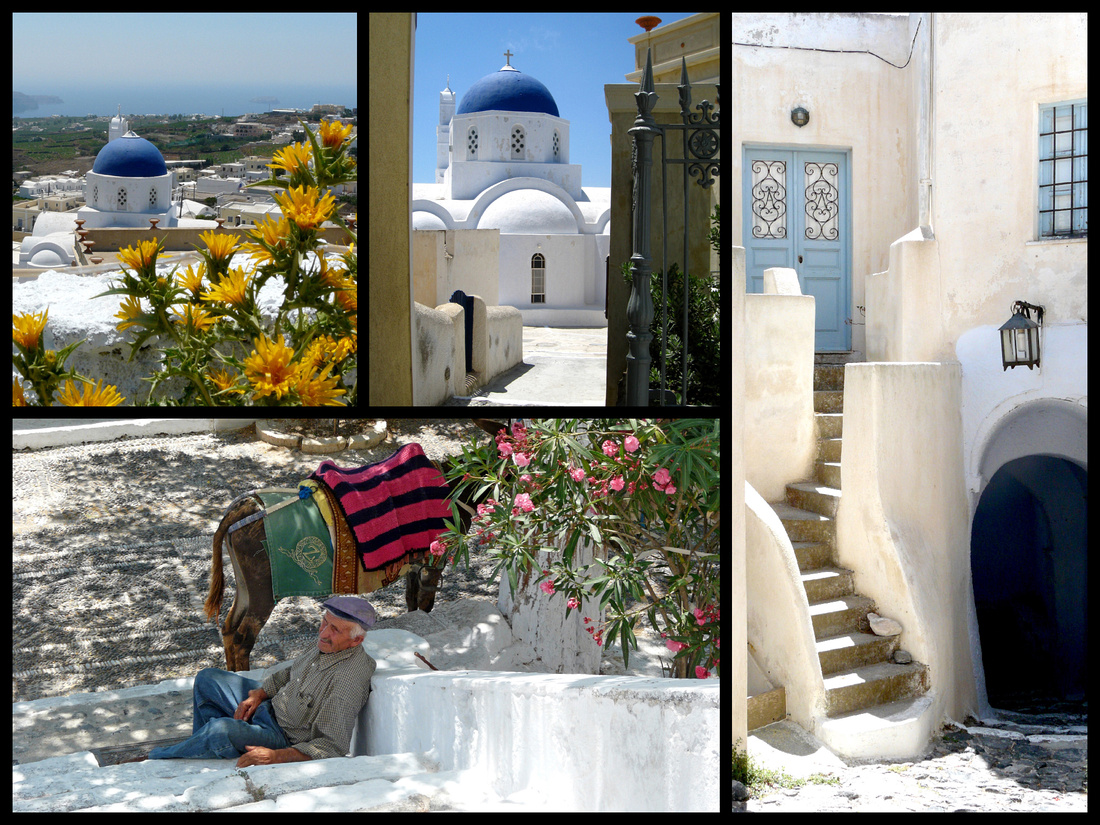 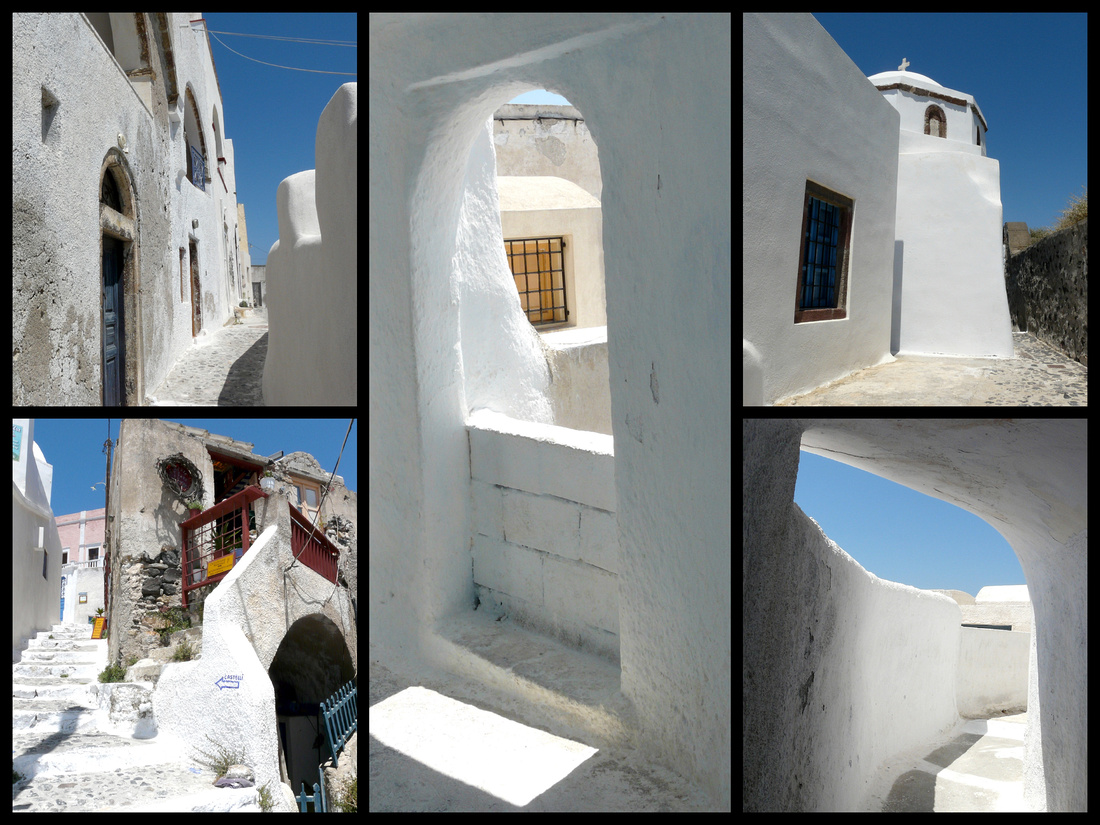 Santorini is famous  for it's sunsets. They are equally impressive from Oia and Fira 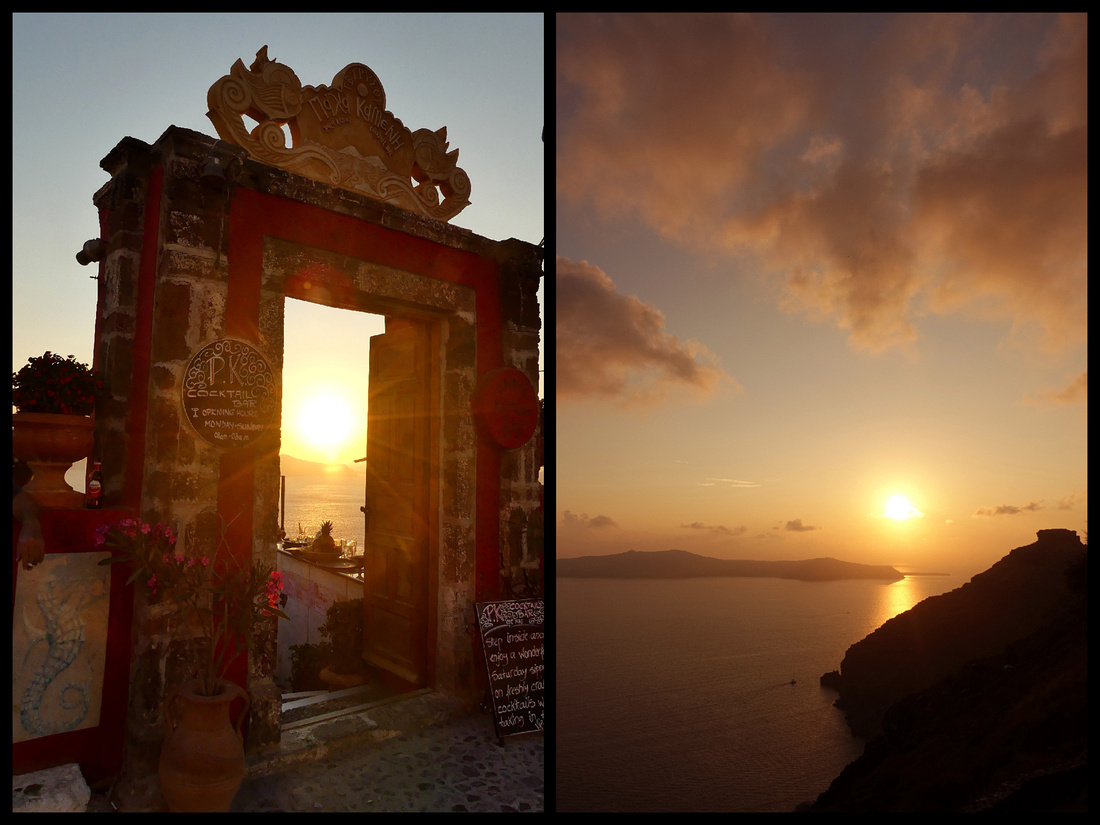 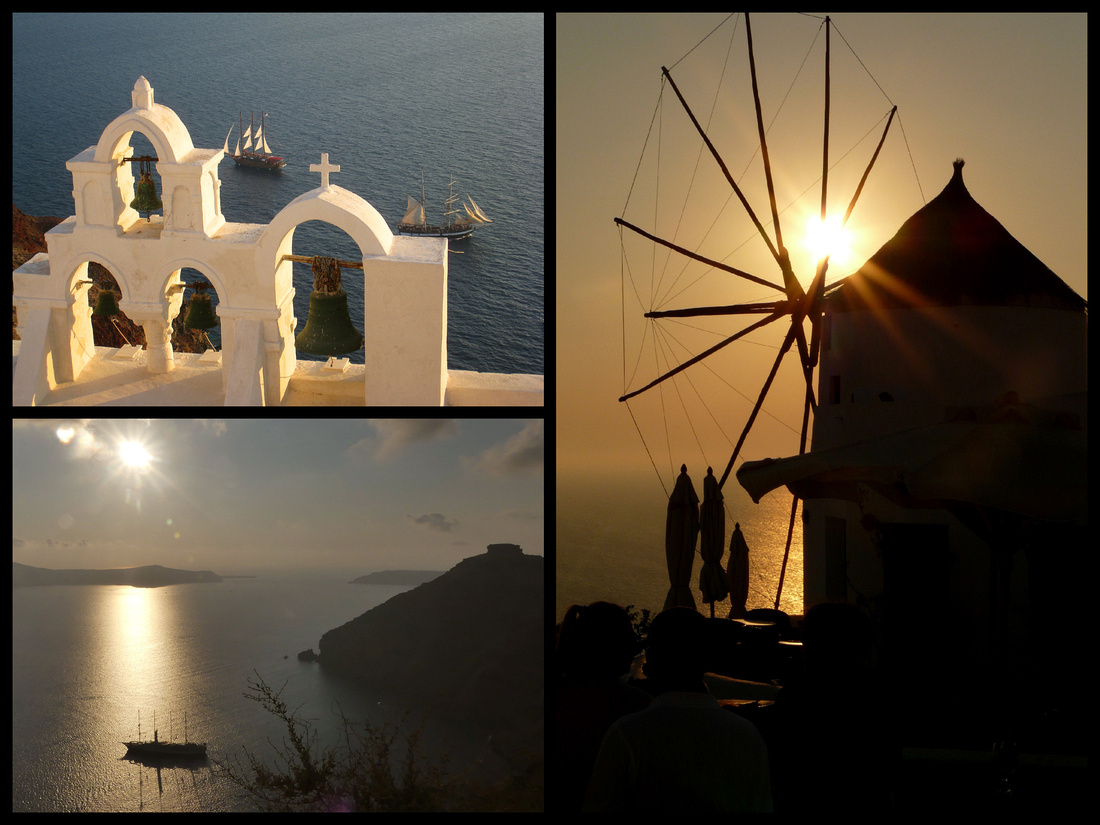 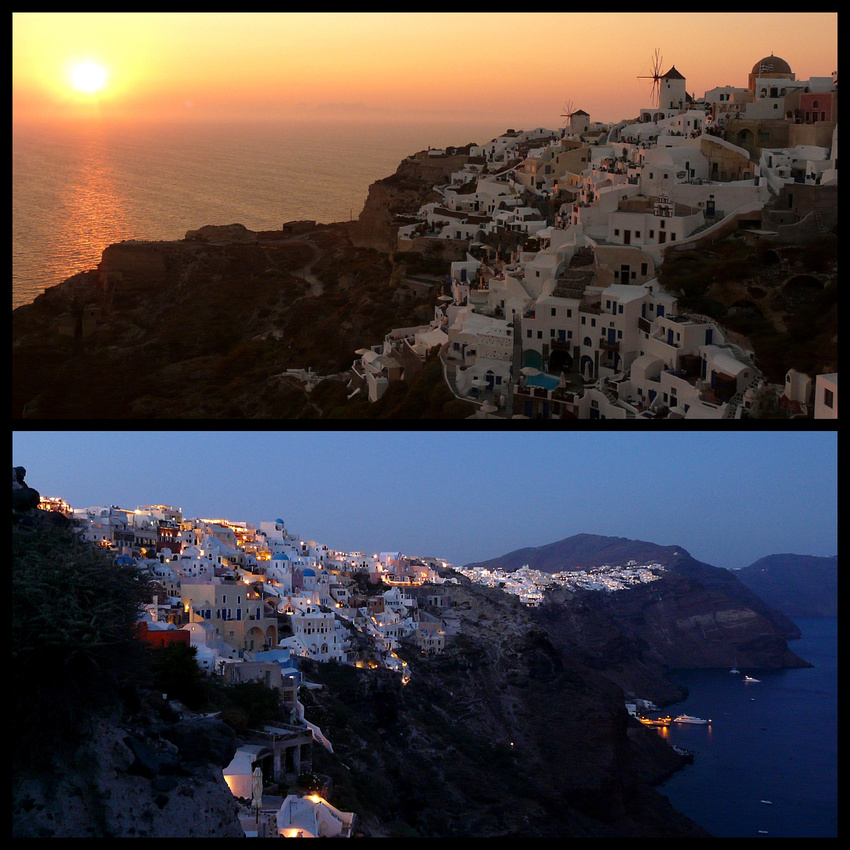 Go to Santorini to see it, but don’t plan to linger for a Greek island experience, because, as I said, it’s in a class by itself, which is bad as well as good.